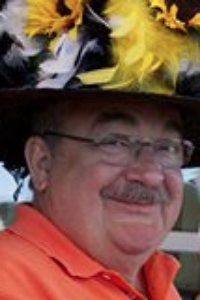 John Michael Gray, 66, of Provincetown died Saturday, September 24th at Seashore Point Wellness and Rehabilitation Center in Provincetown after a short illness. He was the 32 year, life partner of Timothy J. O’Connor. Together since 1984, they were married in 2004, when it became legal in Massachusetts.

Born in Nashua, NH, he was the son of the late Vernon and Phyllis (Duff) Gray. After graduating from Lawrence Academy, Groton, MA, he received his BFA from Cornell University in Ithaca, NY, a Master’s in Education degree from Tufts University and his Doctorate in Curriculum and Supervision from Boston University.

John Michael started his career as a Fine Arts Consultant for the New Hampshire Department of Education working with school districts state-wide on Arts Education programming. He then became Fine Arts Coordinator for the Newton Public Schools retiring in 2008. During this time, he also managed a visual arts and writing awards program for Massachusetts students, affiliated with a national program conducted by the Alliance for Young Artists & Writers, on which he also served as a Member of the Board of Directors. He also was Program Co-director of the Boston Globe’s Scholastic Art & Writing Awards.

Over the years, he received many awards and honors, among them the 2009 Kennedy Center Excellence in School Administration Award, the National Art Education Association’s 2000 Educator of the Year, and the New Hampshire State Art Educator Award in 1983, to name but a few. He also worked with many professional boards and organizations. In 2011, John Michael, after almost 40 years in the field of art education, was honored as Massachusetts Art Educator of the Year.

One of his greatest achievement however, he shared with his partner Tim. The duo was known as the Hat Sisters. The idea started in 1984 as John Michael was preparing for the second Provincetown Carnival celebration. He made costumes for himself and Tim, which included identical dresses and huge hats. The popularity of that effort mushroomed into a significant number of charitable events over the last 32 years, raising significant amounts of money for a variety of causes and cementing friendships all over the world.

The story has been told of a vacation trip on which they were touring the Louvre in Paris. A parisian walked up to them and asked if they were the Hat Sisters from Provincetown in the United States! Their notoriety and charity has warmed the hearts of untold numbers of people.

Along with his beloved husband Tim, he leaves his sister Martha Gray Eufemia of Wells ME and Savannah, GA, a niece, Meredyth Eufemia Sullivan and her husband Adam of Wells, ME and nephew, Samuel John Eufemia of Savannah, GA. He also leaves many loving and wonderful friends locally and worldwide. A brother, Vern Peter Gray predeceased him.

A Celebration of John Michael’s life will be held in Provincetown at 1:00 pm on Tuesday, October 11th at St Peter the Apostle Church, 11 Prince St, Provincetown. The Rev. Jim Cox will officiate. In Boston, the Celebration will be held on Sunday, October 16th at 1:30 pm in the Arlington Street Church, 351 Boylston Street, Boston. Family and friend are invited to attend.