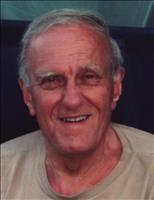 … retired from Raytheon in Waltham; 78
TEWKSBURY - Mr. Lester O. Frisch Jr., age 78, a retired Raytheon group leader, died peacefully at his Tewksbury home, Wednesday afternoon, June 24, in the loving care of his family. He was the devoted husband of Georgette E. (Crispo) Frisch, with whom he had celebrated a 48th wedding anniversary this past November 5th.
Lester was born in Fitchburg, September 1936, one of four children of the late Lester O. and Elsie (Morse) Frisch, and was raised in Fitchburg. He graduated from Fitchburg High School, and earned a degree in Electronic Engineering from Wentworth Institute of Technology in Boston. He retired, after thirty-six years, from Raytheon’s Space Program Division in Waltham, where he had worked as a Group Leader in the testing division. He was proud to have been on the team that created the Guidance System for the Apollo Space Program, responsible for the Lunar Landing and the successful return from the Moon in 1969.
He was a devout Catholic layman as a member of St. William’s Parish, enjoyed travel in the U.S. and Canada, especially to Florida in the winter since his retirement, camping, the times spent with his family at Lake Shirley, was a member of several bowling leagues, and was an antique automobile enthusiast.
Besides his beloved wife, he leaves three children, Michelle Geyer and her husband Jay of Tewksbury, Michael Frisch of Tewksbury, Melissa McCarthy of Lunenburg; two grandchildren, Nichole Frisch of Billerica and Megan Geyer of Tewksbury; a brother, G. Robert Frisch and his wife Linda of Fitchburg and Florida; a sister, Lori Meola and her husband Dennis of Lunenburg; a sister-in-law, Sally Frisch of Otter River, MA, who was the wife of his late brother William; and numerous nieces and nephews.
Visiting hours Sunday, June 28, from 1:00 p.m. until 4:00 p.m. in the Tewksbury Funeral Home, corner of 1 Dewey and 975 Main Sts. (Rte. 38) TEWKSBURY CENTER Ph. (800 in MA or 978) 851 2950. His funeral will begin Monday, June 29, at 9:00 a.m. from the funeral home, followed by a Funeral Mass Monday at 10:00 a.m. in St. William’s Church, 1351 Main St. (Rte. 38) Tewksbury. Burial in Wildwood Cemetery in Wilmington will be private. In lieu of flowers, memorials to the Alzheimer’s Association, 480 Pleasant St., Watertown, MA 02472, will be appreciated. tewksburyfuneralhome.com