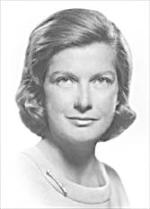 DARTMOUTH -- Noted philanthropist Gratia "Topsy" Montgomery, 77, of Round Hill in South Dartmouth died Sunday, Feb. 20, 2005, at her home.
Born and raised in New York City, she was the daughter of the late Alan G. Rinehart and Gratia Houghton Rinehart. She came to South Dartmouth for the summers at a young age and eventually settled here. While often traveling the world on various philanthropic quests, she always looked forward to returning to the peace and serenity of South Dartmouth.
Ms. Montgomery was known for her boundless enthusiasm and generosity, which she spread over a vast array of charitable organization,s including Southeastern Massachusetts University, the Animal Rescue League, St. Luke's Hospital, the New Bedford Whaling Museum, Dartmouth Natural Resource Trust and Woods Hole Oceanographic Institute.
A longtime friend, supporter and honorary trustee of the Woods Hole Oceanographic Institution, she had been affiliated with WHOI for more than three decades.
While involved, she supported a number of the institution's education programs, helping dozens of summer student fellows, graduate students and post-doctoral fellows launch oceanographic careers. Her commitment to coastal research was recognized by WHOI when she was awarded the Cecil H. Green Award for outstanding individual contributions to oceanographic research.
Ms. Montgomery came from a distinguished family. She was the great-great-granddaughter of Amory Houghton Sr., founder of Corning Inc., granddaughter of mystery writer Mary Roberts Rinehart and daughter of the late Alan G. Rinehart, former editor and producer for Paramount Pictures.
In addition, her late uncle Arthur Houghton Jr. owned the historic Wye Plantation on Maryland's eastern shore.
She is survived by a son, Peter Allatt, and his wife, Nancy, of Greenwich, Conn.; three grandchildren; one step-granddaughter; two great-grandchildren; two nieces; and one nephew.
Her memorial service will be at 11 a.m. March 19, 2005 in Grace Episcopal Church, 422 County St., New Bedford, Ma. to be followed by a reception at the Wamsutta Club across the street from the church.
Remembrances may be made in her name to Tai-ping Foundation which she established in 1964, c/o Market Street Trust Company, 80 East Market Street in Corning, N.Y. 14830.