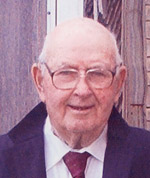 George E. Church, 90, of Rochester died Thursday July 31, 2014 at Sippican Health Care Center after a period of declining health. He was the husband of the late Katherine H. (Hartley) Church.

Born in Rochester, the son of the late George F. and Martha (Smith) Church, he lived in Rochester all of his life.

He was a member of the First Congregational Church of Rochester.

George was a self-taught mechanical genius who ran his father's saw mill and owned and operated a building moving service.

He was very philanthropic member of his community. He established a scholarship fund with the Community Foundation of Southeastern Massachusetts to provide scholarships to students in this area pursuing a nursing degree. He facilitated the purchase of hundreds of acres of land in Rochester through the Massachusetts Fish and Wildlife and the Rochester Land Trust to preserve open space. He was honored as the Standard-Times Man of the Year in Rochester in 2007.

During World War II, he served in the U.S. Army Air Corps and participated in the Battles of Normandy, Northern France, the Ardennes, the Rhineland, Central Europe, and the Air Offensive Europe. He was a member of Veterans of Foreign Wars Benjamin D. Cushing Post 2425.

He is survived by two nieces, Barbara Pasquarello and her husband James of Lakeville, and Janet Estes of Maine; two nephews, George Mercier of Westport and James Mercier of Taunton; his brother-in-law, Henry Hartley and his wife Bonnie of Rochester; his sister-in-law, Shirley Hartley of Rochester; and his close friend, Duffy Clapp of Rochester.

He was predeceased by his sister, Hazel Mercier and her husband Joseph, and his brothers-in-law Greenwood "Sonny" Hartley and Robert Hartley and his wife Rose.

His Funeral Service will be held on Wednesday August 6, 2014 at 10:30 AM at the First Congregational Church of Rochester. Burial with military honors will follow in Center Cemetery. Visiting hours are omitted. In lieu of flowers, remembrances may be made to Community Foundation of Southeastern Massachusetts for the George Earl and Katherine Hartley Church Scholarship Fund, 63 Union St., New Bedford, MA 02740 or the Rochester Land Trust, P.O. Box 337, Rochester, MA 02770. Arrangements are by the Saunders-Dwyer Mattapoisett Home for Funerals, 50 County Rd., Route 6, Mattapoisett. For online condolence book, please visit www.saundersdwyer.com.