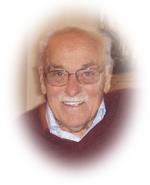 Born in Boston, he lived in Medford all his life. Paul was a Truck Driver with the former Rapid Transit for 30 years and retired in 1982. He served in the U.S. Army as a member of the “Merrill Marauders” stationed primarily in the hills and jungles of Burma. Paul was one of 17 children born to the late Concetta (Scalata) and Eugene Santoro, and 1 of 7 brothers that served in various branches of the armed services during WW II. They were known as the “Fighting Santoro Brothers”. He was awarded a Purple Heart for helping a wounded soldier to safety. He was also injured in the effort, but recovered quickly and returned to the war. Paul was also a member of the Medford VFW Post 1012, Medford Elks Lodge #915 and the Retired Men's Club of Arlington.

Funeral from the Dello Russo Funeral Home, 306 Main St., MEDFORD Saturday at 8 AM followed by a funeral mass celebrated in St. Raphael Church, 512 High St., Medford, at 9 AM. Relatives and friends are respectfully invited to attend. Visiting hours Friday 4-8. Services will conclude with entombment at Oak Grove Cemetery, Medford.