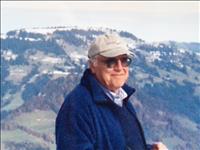 
Gilford-----Rowland Davenport Hazard Keith, local businessman and civic leader, died peacefully at his home on February 21, 2014. He lived a long, full life, continuing to learn and find great joy in family, friends and nature through his last days. The cause of death was congestive heart failure.

Mr. Keith, known as "Rowley", was born on May 18, 1928, in New Haven, CT, son of Susan Bacon and Elmer Davenport Keith. He grew up in New Haven, and spent summers with his family on Squam Lake in Holderness, NH. As a small child, he spent two years in Switzerland. He was a graduate of the Choate School (Class of '45), and Yale University (Class of '48, BE, Mechanical Engineering). He served in the Army during the Korean War (1951-53) as an ordinance engineer, testing anti-tank rockets in Aberdeen, MD.

He had a successful early career in sports car racing from 1949-1959, racing in both the US and Canada at the top racetracks of the day. He specialized in racing British sports cars, including MG-TC, Cooper, Allard and Austin-Healy, and won the Queen Catherine's Cup at Watkins Glen in an MG-TC in 1950. In1955, he won the Mount Washington Hill Climb race in a 500cc Cooper, and in 1956 he briefly held the world record for the race until he was bested by Carroll Shelby's 4,200cc Indy Ferrari. He was the Formula III National Champion for 1956, and second in SCCA points in 1954 and 1957.

Following college, he worked as a mechanical engineer, first at Wright-Patterson Air Force Base in Dayton, Ohio, and then with Arthur D. Little in Boston, MA. He determined early on that he wanted to settle in NH, and in his mid-twenties was able to relocate. In 1954, along with partners Joe Long and Kip Hawkins, he was awarded one of the early US Volkswagen auto dealerships. He moved his family to NH in 1956, first living in Sandwich, and then moving to Gilford in 1958. The dealership, based in Holderness, was known as "Kip and Joes". The partners moved the business to Gilford in 1962, ultimately expanding to include Toyota, Audi, Saab, Mazda, Fiat and Indian Motorcycle franchises. The partners also opened a marina, Boat Service, Inc., in Holderness in 1957. After retiring from the auto dealership in 1981, Keith established RK Realty, Inc. which invested in residential real estate properties in NH and Maine.

Mr. Keith had a strong sense of citizenship, and was active in the local community. He served two terms as Selectman in the town of Gilford, seven years on the Gilford School Board, and also served as Chairman of the Laconia-Gilford-Gilmanton Supervisory Union and as a member of the Gilford Budget Committee. He also served as a Director of the NH Music Festival and the NH Council for Better Schools. He worked actively to help create the Lakes Region Mental Health Clinic and served two years as its Vice-Chairman. He supported local land conservation efforts, and as selectman helped to preserve numerous local properties. He supported many organizations devoted to world prosperity and conservation.

One of his greatest pleasures was traveling throughout the world. In 1950, he toured Europe on an Ariel Square Four motorcycle, and in later years traveled extensively in Europe, Asia, the Middle East and South America. He had a deep interest in world history and a great appreciation of other cultures. He had a special love of Portugal, which he first visited in 1964 and to which he returned almost forty times.

He loved family, friends and pets. He enjoyed sharing a good meal, a nice view or an evening sunset, the wonders of nature, fishing, hiking, sailing his boat on the Maine coast, or riding the backroads on his motorcycle. He read voraciously, of topics ranging from world affairs to Eastern philosophies. His later years were filled with a deep sense of gratitude for all of the rich experiences and gifts in his life.

Friends and family are welcome to join an outdoor gathering in his honor at noon on Saturday, March 1, 2014, at Shepard Hill in Holderness, NH, followed immediately by a memorial celebration to be held at the Squam Lake Inn in Holderness. In lieu of flowers, please send gifts in Rowland's memory to either:
Lakes Region Conservation Trust PO Box 766 Center Harbor, NH 03226 or NH Humane Society
PO Box 572 Laconia, NH 03247

Wilkinson-Beane-Simoneau-Paquette Funeral Home & Cremation Services, 164 Pleasant Street, Laconia, N.H. is assisting the family with the arrangements. For more information and to view an online memorial go to www.wilkinsonbeane.com.