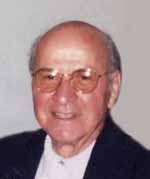 Robert Xifaras, 83, of Marion, died Sunday March 21, 2004 at home after a long illness. He was the husband of Margaret M. (Paliatto) Xifaras.

Born in New Bedford, the son of the late Elias and Kanela (Xifaras) Xifaras, he lived in New Bedford before moving to Marion 40 years ago.

He was a member of St. George Greek Orthodox Church.

Mr. Xifaras was the proprietor of the Mariner Inn in New Bedford until his retirement in 1995.

During World War II, he served in the U.S. Army. He was a member of the American Legion. He attended Northeastern University in Boston.

Survivors include his wife; 3 sons, James M. Abdelnour and his wife Janice of Dartmouth, Mark Abdelnour and his wife Jo-Anna of Marion, and Robert Xifaras of Florida; 5 daughters, Valerie Leger, Robin Xifaras and her friend, Patrick LaRue, and Cynthia Kinney, all of New Bedford, Margaret Hardsog and her husband William of Wareham, and Camille Dawn Xifaras of Assonet; a sister, Stella Strules and her husband Frank of New Bedford; and many grandchildren, great-grandchildren, great-great-grandchildren, nieces, nephews, and cousins.

Funeral from the Saunders-Dwyer Mattapoisett Home for Funerals, 50 County Rd., Route 6, Mattapoisett, Thursday March 25, 2004 at 9:30 AM.Funeral Services at St. George Greek Orthodox Church, 87 Ashley Blvd., New Bedford at 11 AM.Relatives and friends are invited to attend. Visiting hours will be on Wednesday March 24, 2004 from 4-8 PM. Burial will be in Little Neck Cemetery, Marion. In lieu of flowers, remembrances may be made to the Alzheimer's Association, 36 Cameron Ave., Cambridge, MA 02140.