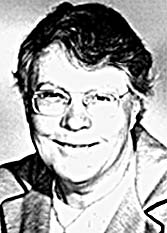 Born in New Bedford, the daughter of the late John B. and Louise M. (Endicott) Strongman, she lived in Dartmouth most of her life.

She was raised on Elm Street and still resided up the street from her original homestead. During her youth, she spent much time rowing and sailing the waters bordering the village of Padanaram.

She attended Dartmouth public schools, with two years at Friends Academy. She graduated from Radcliffe College in 1934 and also received a master's degree in marine biology there in 1935.

During her college years, she studied at the Marine Biological Laboratory at Woods Hole and did graduate work at the Bermuda Biological Station.

As a young girl, she toured extensively with her father, usually by steamer, ocean liner, or train. Their trips included visits throughout the United States, Europe and Canada, experiences that helped shape her character.

In the mid-1930s, Ms. Strongman began her first venture into what was to become her career as a professional volunteer, much to the benefit of the town.

In 1936, a nationwide Girl Scout Mariner program was launched. It provided young women, aged 14-18, with an opportunity to participate in a combined Girl Scout/sailing organization.

She launched a Mariners program in her home and was a leader from 1936 to 1979. She combined the program with a summer program that used several Beetle Cats out of the New Bedford Yacht Club. Her Mariners Troops 32 and 38 grew in size and scope to become a model for the national program.

The annual summer street fair on Water Street was the Mariner's major fund-raiser and became one of Dartmouth's favorite family attractions. Proceeds from the fair supported an annual cruise for troop members.

Community service was always high on the list for her Mariners. The troop could be counted on to aid of other local organizations when needed.

When World War II erupted, she and the Mariners worked with the Red Cross, collected newspaper and scrap metal by the ton and organized a marching band when there were few men left to march in the Memorial Day parade. They became the marching band that performed at Dartmouth High School football games and other events.

Ms. Strongman also raised show quality spaniels that competed successfully in shows from Canada to Bermuda, achieving three championships and one Obedience Championship. In more recent years, she owned and trained Cavalier King Charles spaniels and had a champion in Canada and was within one point of becoming a U.S. champion.

She was active in affairs at the Congregational Church through its choir and as a member of the guild. For a number of years, she volunteered regularly at the New Bedford Whaling Museum in the research library and as a guide.

Ms. Strongman was a library trustee since 1949 and was instrumental in the creation of the Dartmouth public libraries in the 1940s. She was a major advocating force for the new Southworth Library and was honored at the library's 30th anniversary celebration with a special recognition and citation from the Board of Selectmen. She was also honored as Massachusetts Library Trustee of the Year by the Massachusetts Library Trustee Association in 1982.

A volunteer chauffeur for the Federal Senior Lunch Program from its inception in the 1960s, she drove senior shut-ins to the Old Town Hall for a hot lunch. This was the forerunner to the Council on Aging which she took an active role in establishing. She was appointed to the board of directors for the COA and continued to serve in that capacity until her death.

She was a dynamic leader for the Friends of the Elderly, a group of volunteers who plan and execute fund-raising events for the COA. In 1996, the Board of Selectmen honored her with a testimonial dinner and named the large meeting room in the council building, "The Louise Strongman Room."

She was also a Town Meeting member for more than 50 years.

She thoroughly enjoyed her career as a "professional volunteer," and had fond memories of her activities, travels, dogs and the wonderful people who filled her life.

Survivors include a cousin, Peter Bundy, and his wife, Natalie, of Hamilton; and a godchild, Kathleen Cotter of White Plains, N.Y.

Her memorial service will be held at the South Dartmouth Congregational Church on Saturday April 17, 2004 at 12 noon.