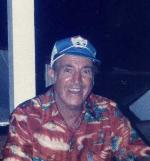 Joseph Raymond Oliver 88 of Provincetown died Wednesday July 27, 2011 at Seashore Point in Provincetown. He was the husband of Joan Oliver. Mr. Oliver was born in Provincetown, the son of the late Louis and Mary Lee (Costa) Oliver. He was a lifetime member of St. Peter the Apostle Church and the Knights of Columbus in Provincetown. He worked for the A&P for 43 years, retiring as produce manager in 1985. This allowed him to devote more time to his growing family. He always looked forward to anytime his grandchildren would come and visit him. He would laugh and play his harmonica watching his grandchildren dance to his tunes. He will be remembered as a man who found joy and peace in his family and his Catholic faith. He and Joan were married 53 years. Besides his wife he is survived by his 5 daughters, Sheila Colburn and her husband Paul of Truro, Joanne Machado of Dennis, Cindy Castrigno of Somersworth, NH, Robin McLellan of Eastham and JoMarie Cole and her husband Jim of W. Barnstable, his son Michael Noons of Provincetown, his 7 grandchildren, Cynthia, Lisa, Lucas, Travis, Brandon, Angela and Scott and his 7 great grandchildren. He was the