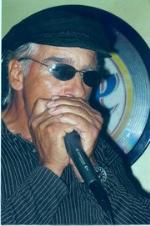 GLOUCESTER: Anthony B. “Tony” Cagnina, Jr., 64, noted blues harmonica player, died Tuesday morning, April 19, 2011 in the Addison Gilbert Hospital. He had been diagnosed only two months ago with a rapidly progressing bone marrow disease.
Born in Tacoma, Washington on April 26, 1946, he was the son of late Anthony B., Sr. and Sally E. (Mullen) Cagnina.
His blues career spanned many decades and he played with many blues players including, Luther Johnson, and was often seen on stage with famous musicians such as B. B. King and Muddy Waters. Tony was well-known on the North Shore as an avid sailor and an electronic technician. He was also a longtime bugler for St. Kevin’s Emerald Knights and the Peabody Muskateers Drum and Bugle Corps. He was loved and will be missed by many.
He is survived by his son, Anthony B. Cagnina, III of Biddeford, ME; daughter, Lee Ann Cagnina of Cranston, RI, and their mother, Wanda Cagnina of Biddeford ME; and sons, James Cagnina of FL and Rick Klein of Apex, NC; siblings, John Cagnina of Gloucester, Michelle Cagnina Breck of Ellsworth, ME and Sabrina Nelson of San Francisco, CA. He is also survived by six wonderful grandchildren and many nieces and nephews and his longtime companion, Kathy O.
His funeral service will be held on Friday afternoon in the Greenlawn Cemetery, Orne Street, Salem at 1 p.m. There are no visiting hours. Relatives and friends are cordially invited to attend.