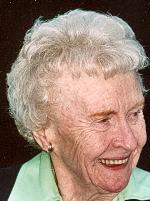 Eileen Elizabeth (Wattman) LaRivee.
Lawrence, Ma. Born September 24, 1925 in Lynn, MA to Thomas M. Wattman and Elizabeth (Beary) Wattman. Educated in the Lynn Public Schools and graduated from Lynn English High School in 1943. She served with the U.S. Public Health Service Cadet Nurse Corps, which was the largest group of uniformed women to serve in World War II, and did her training and work out of Lynn Hospital until 1945. That year she married Leo M. LaRivee. They began to raise a family after WWII, and she returned to nursing part-time as her children grew older, briefly working at Bon Secours Hospital and then for most of her working life as a vocational aid and nurse for the Greater Lawrence Association of Retarded Citizens. Eileen was an extraordinarily kind and compassionate person who always had time to listen to anyone’s problems. She was especially gifted in her ability to sympathize with and respect the needs of people with physical and intellectual disabilities, people who she counted among her dearest friends. Later in life, she most enjoyed spending time with her grandchildren, family members and friends. She loved to read, play cards, and Bingo, go for rides along the beach, and follow late night talk shows on T.V. and Radio. She belonged to the 450th Bomb Group Association “The Cottontails” in honor of her husband. She was a devout Catholic and communicant of the Saint Mary Immaculate Conception Parish in Lawrence.
She was predeceased by her husband of 47 years Leo M. LaRivee, by her daughter Elizabeth LaRivee, and her brother Thomas Wattman, Jr. She is survived by her son Lee LaRivee of Bradford and his wife Maureen; James LaRivee of Lawrence and his wife Joanne; Attorney John LaRivee and his wife Carole of Haverhill; and Grandchildren Mary Beth, David, Matthew, and Jacqueline LaRivee.
Friends will be warmly received on Sunday from 4-8 P.M. at the Kenneth H. Pollard Funeral Home, Inc. 233 Lawrence Street in Methuen.
A Mass of Christian burial will take place on Monday morning at 10 o’clock in Saint Mary of the Assumption Church in Lawrence with burial to follow in Elmwood Cemetery in Methuen. Donations in Eileen’s name may be made to: Class Inc., 1 Parker ST., Lawrnce,MA, Operation Smile 6435 Tidewater Drive Norfolk, VA 23509 or National Neurofibromatosis Foundation, Inc. 95 Pine Street, 16th Floor, New York, NY 10005.