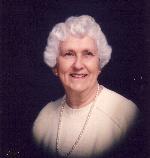 Natalie Webber Gulbrandsen – Of Newton, formerly of Wellesley and Denmark, ME, died peacefully at her residence, October 17, 2007, surrounded by her children. She was 88. She was married to Wellesley Dentist, Dr. Melvin Gulbrandsen for 48 years.

Born July 7, 1919 in Beverly, the first of five children of Kathryn Mary Doherty and Arthur Hammond Webber, she graduated from Beverly High School, 1937 and Bates College, 1942.

Surviving are her children Karen Bean and her husband Donald of Bethel, ME, Linda Goldsmith and her husband Arthur of Newton, Eric Gulbrandsen and his wife Karen of Lovell, ME, Ellen Williams and her husband Howard Jr. of Raymond, ME and Kristen Morgan and her husband John of Holliston. Also survived by her grandchildren Nathan and Mimi, Matthew, Megan, Barrett, Colin, Erica, George, Madelyn, Emjay, Charles and Taylor, her brother John Webber of Danvers and numerous nieces, nephews, cousins and friends.

Visiting hours at the George F. Doherty & Sons Funeral Home, 477 Washington St. (Rt.16) Wellesley, on Friday, November 9, 2007 from 5-8 PM. A celebration of her life will be held on Saturday, November 10, 2007 at 10:30 AM at the Unitarian Universalist Society of Wellesley Hills. Interment was private. In lieu of flowers donations in her memory may be made to the Natalie Gulbrandsen Ministerial International Studies Scholarship Fund, 25 Beacon St., Boston, MA.