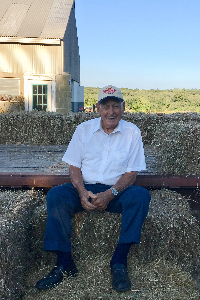 John Eugene Bettencourt, 99, of Dartmouth, passed away late on Tuesday, November 8, 2022. He was predeceased by his wife of 67 years, Dorothy K. (Rose) Bettencourt. Born and raised in Dartmouth on the Bettencourt Farm (a Massachusetts Century Farm), son of the late Manuel and Ermelinda Bettencourt, he was 1 of 6 children. He was a long-term usher and active member at St. John the Baptist Church, Westport.

John devoted his life to his farm and his family and he was a pillar of the farming community of Massachusetts. He was a founding member of the Westport Fair, which he attended annually through summer 2022 (frequently as a competitor in the tractor pulling events). John prided himself on being of help to his neighbors; he would always plow a field or provide agricultural advice to those in need. He proudly celebrated the 100th anniversary of his family’s farm back in 2018, surrounded by friends, family, and colleagues. John loved good food and never missed a Holy Ghost feast, Westport holiday parade, or a johnny cakes breakfast. In his younger days, he loved playing his mandolin and going out dancing with his wife.

Funeral to which relatives and friends are invited will be Tuesday, November 15, 2022 from the Potter Funeral Home at 10:00 A.M. followed by Mass of Christian Burial at St. John the Baptist Church, Westport at 11:00 A.M.

Calling hours will be Monday from 5-8 P.M.

For directions or to sign the online guestbook, please visit potterfuneralservice.com.