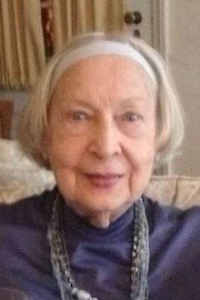 Anne Ley (Koban) from Union, NJ, passed away on November 5 after 99 years on earth. Born in Bayonne, NJ to Frank and Eudokia Koban, she spent the final years of her life in the care and company of her niece, Andrea, in Winthrop, MA. She was married to the late John Ley for 50 years.

They enjoyed many vacations, family gatherings, dinners out, trips to discount stores and the occasional glass of bubbly. Ever the most organized person in the room, Anne worked as a secretary for years at Kodak, Western Electric, and Lucent. Known for her immaculate house and terrible cooking, Anne enjoyed being around people and hearing a good joke. Anne had a large collection of pennies she collected on her daily walks. She had a full life and will be missed by her family.

She is survived by her nieces Andrea Warmbold, Doreen Jones and Gretchen Black and her nephews Michael Koban, Douglas Koban, Stuart Koban and Michael Kip Koban. She will be joining her siblings in heaven: Michael Koban, Paul Koban and Helen Nygaard. She will be remembered by her many grandnieces and grandnephews. Gracie, her loyal canine companion, will be lost without her.