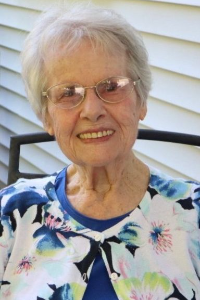 Elizabeth (Betty) was the daughter of the late Agnes (Buchanan) and William Trites, Sr. She was born at home in Revere, MA on August 27, 1929.

After graduating from Revere High School, she began working for the former Suburban Gas Company. It was there that she met her late husband, and they were married August 6, 1955. The couple built their home in Winthrop, MA, raising their children at that home on Villa Ave. She had been a member of the former St. John the Evangelist Catholic Church in Winthrop.

Betty obtained her real estate and broker’s license later in life, selling homes in Winthrop and Revere. She also babysat her grandchildren regularly.

Along with her husband, she enjoyed spending time at their summer home in Center Ossipee, NH.

She frequently took Adult Night Education Classes at Winthrop High School, including Millinery and Cake Decorating being among her favorites.

Betty is survived by her daughters, Kathleen Kligge, Diane Videtto and her husband John all of NH, and Nancy Doucette and her husband Michael of MA, six grandchildren, Stephanie Kligge of PA, Kenneth Kligge VA, Jennifer (Videtto) Bell and her husband Christopher of NH, Joseph Videtto and his wife Jamie Carolyn of MA, Nicole Doucette her fiancé Michael Resweber of RI, Michael (Max) Doucette, Jr. of NC, one great-grandson, Riley Bell, sister Muriel Dunn, brother, Thomas and his wife Gerry, and many nieces and nephews.

In addition to her husband and parents, she was preceded in death by a sister, Thelma Leonard, 4 brothers, William, Jr., Charles, James, and Francis Trites.

A Funeral Mass will be held on Tuesday, November 8, 2022, 11:30AM in St. Michael the Archangel Church-Winthrop. Visitation prior to the Mass will be from 9:30 – 11 AM at the Maurice W. Kirby Funeral Home 210 Winthrop St., Winthrop. Burial will take place at the Belle Isle Section of Winthrop Cemetery.

For those desiring, donations in Betty’s Memory are preferred to be made Care Dimensions, 75 Sylvan St., Suite B-102, Danvers, MA 01923.