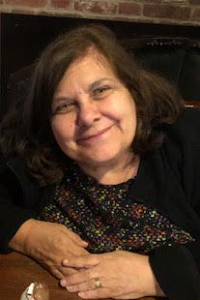 Karen J. (Katsines) Connolly, of Winthrop and formerly of Newton, passed away suddenly on October 28, 2022. She was 69 years old. Karen was born in Boston, and was the cherished daughter of the late Peter Katsines and the late Dorothy (Kontopolous) Katsines.

Karen grew up in Newton, MA where she met the love of her life, Arthur Connolly, also of Newton. They were inseparable, like two peas in a pod. Karen studied nursing and worked at the phone company. Many years later, as she and Arthur settled down and raised their four children in Winthrop, she spent her time working at the Winthrop police department as the Police Matron. Karen was never more happy and fulfilled than when she spent time with her children, their spouses, and the grandchildren. Summer trips to the Cape for mini golf, ice cream and sand castles, enjoying dinners out with the family, seeing shows at the theatre, and watching her kids and grandkids play sports always brought a smile to Karen’s face. You could often hear her say: “All I want is to have the family together!” She loved her husband, children and grandchildren more than life itself.

Karen was the devoted mother of Kelly J. Connolly and her spouse Heidi Spurling and Katrina L. Connolly and her partner Kyle Rogoff all of Newton, Daniel A. Connolly and his wife Lauren Warmbold Connolly, and Thomas P. “Booda” Connolly and his companion Alana Farmer, all of Winthrop. Karen, affectionately called “Yiayia”, will be deeply missed by her grandsons Daniel A. Connolly Jr. and Theodore J. Connolly of Winthrop. Karen was the dear sister of Peter Katsines, his late wife Joan, and Aunt of Peter, Brian and the late Kimberly Katsines, all of Pepperell. She will be missed by many of the Connolly, Noonan, Maynard, Driscoll and Oliver-Asquith families.

Funeral services will be held on November 2 at 10:00AM at the Hellenic College-Holy Cross Chapel 50 Goddard Ave. Brookline, MA. Relatives and friends are invited. Interment will be in Winthrop Cemetery (Belle Isle Section). Visiting hours will be held in the funeral home on Tuesday November 1st from 5-8PM.