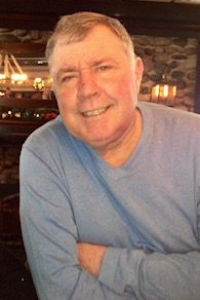 Thomas Patrick May of Palm Harbor, Florida, formerly of Winthrop, MA, passed away suddenly on October 11, 2022. He was 74 years old. Born in Buffalo, NY, he was the first of 8 children to his late parents James and Norma (Shephard) May.

Tom grew up in Dorchester & Hyde Park, MA and was a graduate of Don Bosco Technical High. He used his Graphic Arts major in a very successful career in Print Sales and Estimating. He taught Print Estimating at Northeastern University. He was a long-time member of the printing industries Craftsman Club, a member of the Dunedin Golf and Country Club, and a past long-time member of the Cottage Park Yacht Club. He was also the former vice president of Mass Bay Sailing Offshore.

Tom was an avid sportsman enjoying great accomplishments in Basketball, Golf and Sailing. At 6’5”, Tom was the reserve center for Bosco and played a key role in a near upset win in the Tech Tourney against Melrose High in the old Boston Garden. Golf and Sailing were also a big part of Tom’s life. A long ball 300-yard driver led to a very good scoring average in the high 70’s, 7 holes in one’s and a sandbagging 9 handicap. But his sailing exploits with son Timmy and brother Billy led to a room full of trophies with too many wins to mention aboard his boats, Sailsman and Hound Dog, as well as a regular crew and backup driver on Dick Hyde’s, Freightrain.

Affectionately known as Tommy Mo, The Big Dog, The Dancing Bear and Pop. Tom will be sorely missed.

His funeral will be from the Maurice W. Kirby Funeral Home 210 Winthrop St. Winthrop, on Thursday, October 20, at 9AM, followed by a funeral Mass in St. Michaels Parish-Winthrop, at 10AM. Relatives and friends are invited. Interment will be private. Visiting hours will be held on Wednesday, from 4-8PM. In lieu of flowers, donations in his memory can be made to Make-A-Wish 133 Federal St. 2nd Floor, Boston, MA 02110.