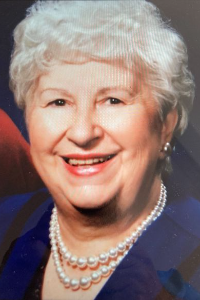 In addition to raising 2 boys with her husband George, she enjoyed a career that spanned 31 years during which time she was the Administrative Assistant to the Principle at Dom Savio Preparatory School in East Boston. She was affectionately known simply as “Mrs. Sim” to many of the students she encountered over the years.

After retiring, Dorothy moved to an Independent Living community in Danvers, where she rekindled her interest in painting, much to the joy of the many people she shared her paintings with. At age 94 her re-found talent culminated in her winning a state-wide contest to redesign the logo for the Massachusetts Assisted Living Association (Mass-ALA). Dorothy certainly lived a full life and she will be missed by all those she touched for nearly a century.

Visiting hours will be held in the Maurice W. Kirby Funeral Home 210 Winthrop St. Winthrop on Friday, October 14, from 9-12PM, followed by a funeral service in the funeral home beginning at 12PM. Relatives and friends are invited. Interment will follow in Winthrop Cemetery. In lieu of flowers, donations in her memory can be made to Care Dimensions 75 Sylvan St., Danvers, MA. 01923.