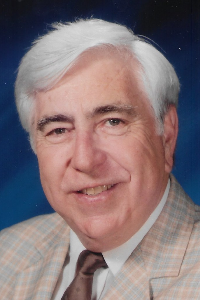 FOLEY, Charles J. of Dedham, passed away peacefully at home on October 4, 2022, age 88. Beloved husband of Regina M. (Caliri) Foley. Son of the late Leo F. and Jean (Muldoon) Foley. Brother of the late Leo Foley and Jayne Johnson. Also survived by a nephew and many nieces.

Charlie left us a better world. An accomplished man who touched the lives of many as a friend and mentor. He held degrees from St. Michael's College, Winooski, VT, Boston College, Worcester Polytechnic Institute, and U Mass. After serving in the Air Force he began his teaching career at Dedham High School in chemistry and physics. Accepting a position as vice principal he began a 26 year commitment to not only educate but help mold the character of his students.Charlie took great satisfaction in having a positive influence in their lives.

On November 22,1959 he married his true soulmate Regina Caliri. Together they were accomplished breeders of Airedale Terriers. Charlie became a respected judge, participating in many high profile dog shows nationwide.

The Foley family extends great love and appreciation to all the caregivers and especially to Christine Ciolfi whose efforts made it possible for Charlie and Regina to remain in their home together.

A visitation will be held at the George F. Doherty & Sons Wilson-Cannon Funeral home, 456 High St., Dedham on Saturday, Oct. 8 from 8:30-9:30am followed by a Funeral Mass in St. Mary’s Church, Dedham at 10:00am. Relatives and friends kindly invited. Interment in St. Joseph Cemetery, West Roxbury.