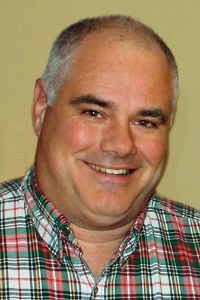 Clark A. Smith, 60, of Londonderry, NH, passed away on September 27, 2022, at Mass General Hospital in Boston, MA, after a long battle with heart failure. As always, he was a fighter until the end and greatly admired for his stoic nature.

Born in 1962, Clark spent his early years in Vermont. He became a determined athlete, playing high school football and was state champion in wrestling. He went on to play rugby in college and was an advanced skier, snowboarder, and avid outdoorsman. He graduated from Norwich University in 1984. After marrying his wife, Kimberly, they settled in Londonderry in 1997. Clark held various positions as an Insurance Broker, Entrepreneur, Realtor, and most recently as a Manager at Home Depot in Salem, NH.

Clark was a true do-it-yourself man of many talents. He could fix just about anything. He never went anywhere without striking up a conversation. And if you ever needed information about a location, he’d probably been there and could give you a “shortcut”. Clark had a passion for animals, especially the family’s newest boxer, Liko. He loved the outdoors - whether he was fishing, hiking, camping, or trying something new. He never tired of trying to catch ‘the big one’ and always had the highest tally of the day.

Clark also loved watching sports, especially when his sons were on the lacrosse field. Many will remember him as Coach Clark, as he was an amazing asset to the town’s youth lacrosse program. He passed along his love of sports and competitive nature to his children. Clark spent many days riding his motorcycle and connecting with others over this interest. He hosted an annual motorcycle event called CroMag, and will be deeply missed by the special friends he made. Anyone who knew Clark will never forget his deep laugh, contagious grin, and “Clark-isms”. Clark was larger than life, his shoes cannot be filled.

He leaves his wife, Kimberly, and their sons, Mason and Hunter, of Londonderry, NH; his daughter, Amanda, of Concord, NH; parents, Joy and Wayne Smith, of Weathersfield, VT; and sister and her husband, Brianne and Scot Bemis, and their children Abby and Bret.

A Celebration of Life was held by Clark’s family on Saturday, Oct. 15, 3:30-5:30pm at The Orchard Church, 136 Pillsbury Rd, Londonderry, NH. The open house was a relaxed gathering and friends were invited to come share fond memories and to bring a written story or impression of Clark that his children can treasure. Donations can be made to an education fund for Clark’s children at https://everloved.com/life-of/clark-smith/ .

There was also a gathering held by Clark’s parents at his childhood home on Saturday, Oct. 8, 11am, 1161 Rt 5, Weathersfield Bow, VT. Lunch and non-alcoholic drinks were provided. Clark was most comfortable in Carhartts or khakis, so dressing comfortably for an outdoor event was important.