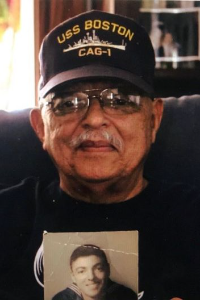 Alvin B. Chavis of Winthrop passed away unexpectedly on September 27, 2022 at the age of 84. He was the beloved husband of Karin A. (Broberg) Chavis. Born in South Hill, VA, he was the cherished son of the late John E. and Alma B. (Brown) Chavis.

Alvin was a U.S. Navy veteran serving from 1956-1960 on the USS Boston. Prior to his retirement, Alvin worked as an LPN in the Outpatient Department at the Chelsea Soldiers Home for 37 years. He also managed the Chelsea Soldier’s Home winter and summer bowling leagues for almost 40 years, something he truly loved. Alvin enjoyed gardening, spending numerous hours tending to his vegetables and flowers. Above all, he was a proud husband, father and grandfather.

Alvin was the devoted father of Michael Chavis and his wife Christine of North Andover and Deborah “Debbie” Chavis of Winthrop. He was the adored grandfather of Corey Chavis, Meghan Dalton and her husband Griffin, Michael John Chavis and Robert “Bobby” Diaz. Alvin was the dear brother of Virginia Coleman of Philadelphia, Bettye Gaines of Middleboro, Douglas Chavis of Weymouth and the late James Young, Dorothy Evans, Edgar Young, William Chavis, Sarah Lewis, George Chavis and Carlton Chavis. He is also survived by many nieces and nephews.

At the request of the family, funeral services will be private. In lieu of flowers, donations in his memory can be made to the Viking Pride Foundation at PO Box 520037, Winthrop, Massachusetts 02152 and/or Boston Wounded Veterans at https://theyfoughtweride.com/donate.