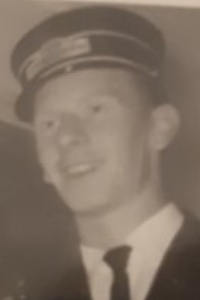 George Burchell Chapman, Derry, NH, passed away on Tuesday, September 20, 2022. He was born in Truro, Nova Scotia on February 6, 1939, the son of Hazen Gerald and Beatrice (Wellwood) Chapman. George attended and graduated from Colchester County Academy in Truro. He was very active in the Boy Scouts of Canada, was a member of the High School football team, and also enjoyed playing the bagpipes. After graduation, he drove a delivery truck (before trucks were fashionable) for a major bread and pastry company located in Halifax, NS, bringing supplies to the major grocery stores and outlying smaller stores around Colchester County, a full days run. On returning home, he would park his truck in the yard and proceed to his room to do his bookwork, leaving his truck unsecured; some locals and “family” would invariably sneak a few of the prized “Burlington Buns”; George would never know who any of “us” were, as there were no snitches (all guilty as charged).

He was a member of the Truro Auxiliary Police Brigade in Truro. George attended Perry F. Rockwood Church, where he was baptized and christened at the tender age of 9, which he later would jokingly refer the as “fire insurance”, claiming that phrase for his own, (it was plagiarized).

The family grew up to respect all classes of life. There was no such thing as racial discrimination. We were never told to think of ourselves as “high and mighty” or “better than”, and consequently we didn’t. Any race or creed could play on our ball teams, hockey or whatever sport we could make up as long as they were reasonably good at sports.

At Alice Street Grade School, there was a major pop (“soda” in American vernacular) factory directly across from the school, coincidentally named “Chapman’s Beverage Factory”. So, George claimed it, why not? Our name was Chapman. No one knew the difference, not even us. We thought we were rich and so did everyone else.

George was a gentle and kind man, generous to a fault (sometimes to his own chagrin), “we” were always well intentioned, and however, sometimes “we” didn’t always carry through. George totally loved to play pranks on unsuspecting victims so one needed always be watching him suspiciously as you never knew when it might be your turn. George was very much loved by all his family and, by all who knew him.

In 1962, George hired on in the running trades with the Canadian National Railways as Brakeman and was later promoted to Conductor. He ended his career in Toronto, Ontario in 1995. In 2001, he married his long-time friend, Nancy Louise Eldredge of North Reading, MA. They lived in Richmond Hill, Ontario until 2003 when they moved to Derry, NH.

George was a lifelong member of the Order of the Free and Accepted Masons. He originally joined the order in Ontario in 1976 with the Royal Arch of Ontario. He served as Master of the St. Mark’s Lodge, #44 in Derry, NH. He was a member of the Oddfellows Organization.

A Calling hour was held on Thursday, September 29, 2022 from 8:30 - 9:30am with a service at 9:30am in the Peabody Funeral Homes and Crematorium, 15 Birch Street Derry, NH. Burial followed with a Masonic Service at Forest Hill Cemetery of East Derry.