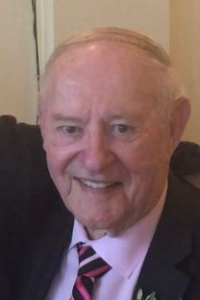 William T. “Bill” Griffiths Sr. of Winthrop passed away on September 20, 2022. He was 95 years old. Bill was the longtime companion of Carol Loomis of Winthrop and the late husband of Therese A. (McGagh) Griffiths. Born in Winthrop, he was the cherished son of the late Copley E. and Blanche (Burroughs) Griffiths.

Bill was a WWII Veteran, serving in the U.S. Navy as a navigator for a PBM seaplane from 1944 to 1946. Prior to his retirement, he was the Commissioner of Public Works for the Town of Brookline. Bill was a member of the Winthrop Yacht Club, the ASCE/BSCE, the Massachusetts Highway Assn. and he served for many years on the Brookline Credit Union Board of Directors.

Bill was the devoted father of William T. “Bill” Griffiths Jr. and his wife Peggy, Gail A. Covelle and her husband Fred and Joe J. Griffiths and his wife Susan all of Winthrop and Sue M. Donahue and her husband Neil of Tewksbury. He was the adored grandfather of Jennifer Dykens, Michael Griffiths, Samantha Covelle, Greg Covelle, Alexandra Rhoads, Matthew Donahue, Brian Donahue, Jeffrey Donahue, Jordan Griffiths, Jonathan Griffiths, Kelsie Griffiths and Kirsten Griffiths and the loving great-grandfather of Jackson and Camden Dykens, Olivia Donahue and Corey Covelle. Bill was the dear brother of Judy MacLaughlin of Boxford and the late Thelma Hazelton.

Funeral from the Maurice W. Kirby Funeral Home 210 Winthrop St. Winthrop on Monday, September 26, at 9AM, followed by a funeral Mass in St. Michael the Archangel Parish-Winthrop at 10AM. Relatives and friends are invited. Interment will be in Winthrop Cemetery (Belle Isle Section). Visiting hours will be held in the funeral home on Sunday, from 4-8PM. In lieu of flowers, donations can be made to New England Shelter for Homeless Veterans 17 Court St. #2601, Boston, MA 02108 or to a charity of your choice.