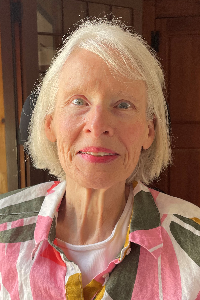 Nancy Neubert Kumaraswami born April 17, 1952 to Bob and Joan Neubert died September 14, 2022 surrounded by her loving family. Nancy was the youngest of three children and grew up in Euclid, Ohio. She was an active child and spent summers swimming in the family pool and later grew up to be a talented basketball player. Through her life, Nancy was steadfast on one principle, she would leave things better than she found them.

She went off to college at Bowling Green State University where she studied social work. In the waning days of her senior year, in a dimly lit bar she found herself sitting next to an intriguing fellow with an intriguing name - Uday Kumaraswami. Uday would pursue her for several years and through several failed marriage proposals. She eventually relented and the two were married in a small but joyful ceremony in 1977. The early days were challenging for the couple as Uday looked for work, but Nancy, committed to her principle, worked as a social worker and supported the couple.

The two eventually moved to Fairfax, Virginia and welcomed two daughters into the world. Again, driven to improve things, Nancy went on a crusade to have street lights installed in their neighborhood. Nancy and family relocated several times throughout their lives, and Nancy never had trouble making friends. She was always hosting as if she was the one who had been in the community for decades. Her kindness was infectious and built a group of close friends she has until this day. Nancy and Uday spent several years living in Singapore and even brought Nancy's mom, Joan, along.

Nancy was not much for hobbies, but she was always active, often volunteering. In fact, her last act was donating her brain to MGH for research after her long struggle with a rare and aggressive form of Parkinson's Disease. The thing that gave her most joy was her family, especially her grandchildren.

Funeral Mass to be held at St. John the Evangelist Church at 9 Glen Road Wellesley, MA on Saturday, October 15, 2022 at 11am. Family will receive guests beginning at 10:15am. In lieu of flowers, memorial donations may be made at psp.org to further research of Progressive Supranuclear Palsy.