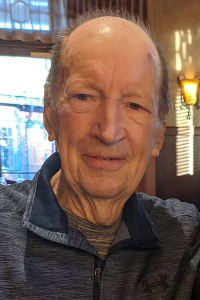 Ivan K. Spencer, Jr., 85, of Bedford, NH, passed away after a brief illness Monday September 12, 2022, at Catholic Medical Center, Manchester, NH. He was born on October 20, 1936, in North Anson, ME, a son of the late Ivan K. Sr. and Eunice (Moulton) Spencer. He was a resident of Bedford for the past two years, formerly splitting his retirement years between Portland, ME and Lakeland, FL. Prior to that, Ivan and his wife raised their family in both Madison, ME and Wilton, ME. Ivan worked his way to much success in the shoe industry, starting in the Norwock factory making shoes in Norridgewock, ME, and by the time of his retirement in 1996 had ascended to being the VP of Manufacturing/Sourcing for Bass Shoe Company. Ivan enjoyed spending time with his large family, playing cards and poker with friends, in addition to being an avid golfer for most of his life.

He is survived by his loving wife of 66 years, Marilyn (Charron) Spencer of Bedford; two daughters, Sandy Cowan of Madison, ME, and Susan Plante of Londonderry, NH; three sons, Garry Spencer of Old Town, ME, Ivan Spencer, III of Hollis, NH, and Dean Spencer of Maine; as well as ten grandchildren and 12 great grandchildren. He was predeceased by his sister Barbara Dufromont and brother Garry Spencer.

Following cremation, memorial calling hours will be held on Sunday October 9, 2022 from 2 – 4pm in the Peabody Funeral Homes and Crematorium, 290 Mammoth Road, Londonderry. Memorial contributions may be made in Ivan's name to the American Diabetes Association (ADA) https://diabetes.org.