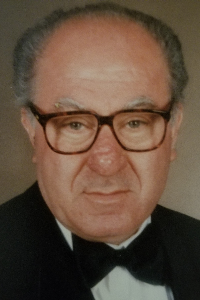 Sahely, Camille of Wellesley, formerly of Kfeir, Lebanon and Melbourne, Australia, died peacefully at home on August 31, 2022 with his family by his side at the age of 91.

He was the son of the late Abdallah and Zahia Sahely. Beloved husband of Venice (Cahaly) Sahely for 58 years. Devoted father of Alexander C. Sahely and his wife Donna of Framingham, Nadia M. Sahely of Cleveland, OH, Colette A. Sahely and her husband Peter Wallace of Arlington, and the late Stephanie A. Sahely. Loving grandfather of Leila, Alex Jr. and Alyssa.

Camille earned his B.S. in Chemical Engineering at the Ecole Supérieure des Arts et Métiers in Beirut (Saint Joseph University of Beirut). His career began in the textile and petroleum industries in Damascus and Sidon, Lebanon, before emigrating to Melbourne Australia where he worked at Heinz, Lever Brothers, and founded Swan Chemical. In the 1960s, he came to the United States for research and development, and his work turned to the burgeoning high-tech industry in the Boston area, where he was one of the pioneers in interconnect technology design, working at Honeywell and Digital Equipment Corporation for many years. Camille holds several industrial patents. He traveled internationally, gave many presentations, and was active in such professional societies including the American Chemical Society and the IEEE Computer Society. He also taught courses on circuit manufacturing at Northern Essex Community College Center for Business and Industry and consulted.

Upon his retirement, Camille became an avid gardener at the Wellesley Community Gardens. Inspired by the gardening of his grandmother and ancestral village, for nearly 30 years, he cultivated Mediterranean delights including mint, Lebanese squash and his special passion, tomatoes, which he loved sharing with family, friends, and the community. His love of science was also part of this endeavor, and he was dedicated to research on plant science and pathology.

In addition to gardening, Camille was passionate about Byzantine chant which he learned in Lebanon. He loved music, Middle Eastern and European history, cooking, and genealogy. At the age of 88 he discovered Facebook and enjoyed making contact with friends and family members around the globe. Camille was devoted to his family and the Wellesley community where he lived for 56 years.

Visitation will be held at St. Demetrios Greek Orthodox Church, 57 Brown St. Weston on Wednesday, September 7, from 10-11am followed by a funeral service at 11am. Relatives and friends kindly invited. Interment in Woodlawn Cemetery, Wellesley.

In lieu of flowers, expressions of sympathy may be made in Camille's memory to the Wellesley Food Pantry, wellesleyfoodpantry.org or May Center School for Brain Injury, 1 Commerce Way Norwood, MA 02062.