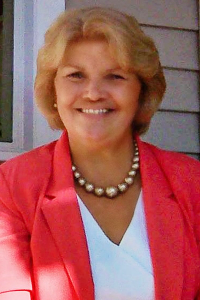 Mary Lou (Sullivan) Leppert of Norwood formerly of Canton and West Roxbury passed away on August 26, 2022. She was the youngest child of the late Eleanor (Donovan) Sullivan and Robert E. Sullivan. Born and raised in West Roxbury, Mary Lou attended Notre Dame Academy and continued on to Parsons College. She also enjoyed her summers in the Berkshires at her family’s overnight camp, Camp Fernwood.

Her professional life began at Prudential Life Insurance where in addition to successful planning of large international conferences, Mary Lou was crowned “Miss Prudential”in 1969 at Northeastern Home Office of the Prudential Insurance Company. She recently retired from Fidelity Investments, where she served as Executive assistant to members of senior management.

She had a life long love of the game of tennis and the beach. Mary Lou leaves behind her one and only daughter, Meredith (Leppert) Markle, of Newton formerly from Canton & West Roxbury as well as her three beloved granddaughters Allison, Jadelynn and Amelia Markle. Mary Lou is predeceased by siblings Carolyn Fitzgerald, Robert Sullivan,Jr., and Charles Sullivan and is survived by her sister Eleanor Tucker of Portsmouth, NH. Mary Lou will be greatly missed by dear friends, cousins and her large extended family.

A Celebration of Life will be scheduled at a later date to honor Mary Lou and her constant beautiful, positive attitude and smile during life’s more difficult times.

In lieu of flowers a donation may be made in Mary Lou’s name to the Cystic Fibrosis Foundation an organization very dear to Mary Lou’s heart.