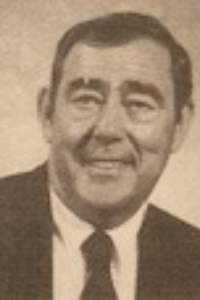 Quinebaug, Ct.
Philip Demetre “Phil” Thomas 84
Phil Thomas died peacefully at Harrington Memorial Hospital in Southbridge after a short illness.
He was the son of Demetre and Afrodite Thomas of Fabyan CT. He was predeceased by a daughter Susan Marie
And by four sisters – Marian and Sandra Thomas of Fabyan, Sophie Bendo and Irene Stefani of New Jersey and
Four borthers – Bill, Van, Mike and Pete Thomas all of Thompson.
Phil leaves his wife Barbara of 53 years and a son, Mark.
He was a graduate of Tourtellotte Memorial High School and the New England School of Accounting.
Phil served in the US Army, being stationed in Germany. He was a partner in Thomas Garden Center,
A retail nursery business in Quinebaug as well as a principal in a real estate investment company that owned
Residential properties.
Phil was active in Thompson town government, being a member of the Thompson Redevelopment Agency and
Serving as its chairman for many years. He was a member of the Conservation Commission since 2004 and served
As chairman for the past five years.
Phil was active in philanthropy. He was very active in the Shriners and was a fifty year member of Cornerstone –
Quinebaug AF&AM. Being a member of the Shrine Club of eastern Connecticut he served as potentate of
Sphinx Shriners in 1999.
He was a member of the Board of Govenors of the Shriners Burns Hospital in Boston from 1997 to 2004 and was
Responsible for dozens of children getting free medical care.
Calling hours are Friday, August 26, 2022 from 9:30 to 10:30 AM at Sts Constantine and Helen Greek Orthodox Church
At 35 Lake Parkway, Webster, MA. followed by service at 10:30 in the church. Burial will follow at St Joseph Garden of Peace
Cemetery, Webster, MA
Arrangements will be handled by ROBERT J MILLER FUNERAL HOME AND LAKE CHAPEL at 366 School Street, Webster, MA.
“May his memory be eternal”
In lieu of flowers contributions may be made to the Shriners Burns Institute, 51 Blosson Street, Boston, MA 02114