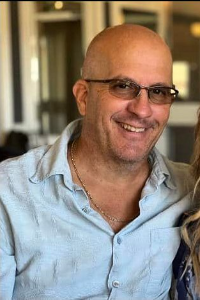 Webster/Winthrop
Robert L. Dumas, Jr
On Monday August 15, 2022 Robert Louis Dumas, Jr of Webster, MA, a loving husband and father, suddenly and tragically passed away at the age of 55.
He is formally of Milford, MA. and was born and raised in Winthrop until he married his wife, Kerry (Conway) Dumas also formerly of Winthrop, MA.
Robert and Kerry were high school sweethearts and recently celebrated their 33rd wedding anniversary.
He is survived by his mother Joan Dumas and predeceased by his father Robert L. Dumas Sr. He also leaves his four siblings, Kevin Dumas (wife Mary),
Diane Sullivan, Cathy Hamilton (deceased), William Hamilton (deceased), Susan Gulla, John Gulla (deceased). He has two beautiful daughters,
Kristine Geary, 29 and Stefanie Dumas, 27. Robert happily welcomed Zachary Geary into his family when his daughter Kristine and he wed last September.
He also has numerous extended families of in-laws, aunts, uncles, cousins, nieces, nephews and grand nieces and nephews whom he adored.
He is described by his family and friends to be a kind, friendly, goofy and lovable guy. He always spoke about his family with such pride to anyone who would listen.
In lieu of flowers he would like donations to be made to the Aaron Zenus Foundation at P O Box 16, Milford, MA 01757 ( Formally known as Friends of
Milford Area Special Olympics).
Visitation will be Wednesday, August 24, 2002 from 4 to 7 PM at the ROBERT J MILLER FUNERAL HOME AND LAKE CHAPEL, 366 School Street, Webster, MA.
A mass of Christian burial will be Thursday, August 25, 2022 at 10 AM at St. Louis Church, 15 Lake Street, Webster, MA
Burial will be at a later date in North Cemetery, Oxford, MA.