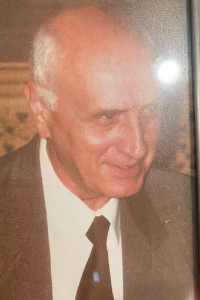 Philip Anthony Garufi of Dedham, passed away peacefully on August 20, 2022, after a long and courageous battle with Parkinson's Disease. He was 92 years old.

Nicknamed " Sonny " by his father he was born on July 12th, 1930 in the South End of Boston during the Great Depression.

Philip showed a passion for music early on, was self taught, and could play guitar, piano and drums without reading sheet music.

He was accepted into the Navy School of Music in Washington D.C. during the Korean War as a guitarist. He spoke fondly of playing at the inauguration ceremony of President Harry S. Truman while a Navy man as well as doing " hard" time in San Juan, Puerto Rico.

While stationed in Boston Phil played at a local dance where he met the love of his life, Paula McDonough. They exchanged vows on September 4th, 1955 and were married 66 years.

Phil is survived by his loving wife Paula, his children Philip (Mary), Stephen (Emily) Kevin (Vanessa) and Paula Marie. In addition, he is survived by his sister Marie Burns, six grandchildren Elizabeth, Beau, Molly, Cara, Dom and Lexi and 14 nieces and nephews.

He earned his undergraduate and graduate degrees from Boston State Teacher's College. He was a history in Quincy Mass. at the Atlantic Middle School for over four decades.

When not teaching history or playing guitar, Phil could be found at the local pool swimming his daily mile. His annual summer vacation and ocean swims at West Dennis Beach were treasured as were walking the battlefields dating back to the Civil War.

In lieu of flowers please kindly contribute to St. Jude's Children's Research Hospital or to the Parkinson's Disease Foundation.

A visitation will be held at the George F. Doherty & Sons Wilson-Cannon Funeral Home 456 High St. Dedham on Thursday, August 25th from 2-5pm. Funeral from the funeral home on Friday, August 26th at 9am, followed by a Funeral Mass at St. Mary's Church, Dedham at 10am. Relatives and friends kindly invited. Interment Brookdale Cemetery, Dedham.