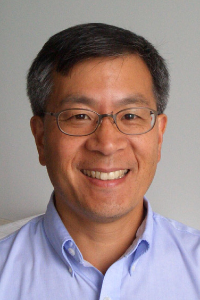 Born to Chinese immigrants Nelson Chang (1923-2020) and Edith Chang (Hsi), Ed grew up in Scarsdale, NY and Darien, CT before attending high school at Choate Rosemary Hall. In 1980, he received an A.B. with honors in Urban Studies and Architecture from Northwestern University.

After graduating, Ed worked as a designer for Kevin Roche John Dinkeloo and Associates before attending Harvard’s Graduate School of Design, where he earned a M.Arch degree in 1985. At Harvard, he was an instructor at the Career Discovery Program and originator and instructor of the Harvard GSD Skills Workshop, an orientation program for incoming graduate students. While at the School of Design, he met fellow student Susan Sylligardos, and they married in 1989.

After graduating from Harvard, Ed worked as a project architect at William Rawn & Associates in Boston, a designer at Richard Reid Architects, Kent, UK, and project director for Rafael Vinoly
Architects, NY.

In 1990, Ed and GSD classmate Roger Sherman won a design competition for the West Hollywood Civic Center in Los Angeles. Their practice in LA, Edmund Chang and Roger Sherman Partners, was active from 1988-1992. In addition, Ed taught as an adjunct assistant professor at USC from 1990-1995, where he conducted design and thesis studios for BArch and MS degree programs. He was also a lecturer in design studio instruction at UCLA and visiting critic at UC Berkeley, ASU and Cal Poly Pomona.

Ed’s pro bono work in LA included service as a board member on the Inner City Cultural Center and design of the Alpine Recreation Center in Chinatown.

In 1992, Ed and Susan founded Chang and Sylligardos Architects, and moved their practice to Boston in 1996. They settled in Auburndale, where their son, Alexander, was born in 1998.

In Boston, the firm’s portfolio included residential and institutional projects at Harvard and MIT. Projects at Harvard included designs for the Economics Department’s Opportunity Insights, the Peabody Museum of Archeology and Ethnology, the Center for African Studies, the Museum of Comparative Zoology, Dana Palmer House, Gutman Library, and the University’s Math and Graduate Arts and Sciences programs.

Ed and Susan moved to West Newton in 2010. Ed was an avid squash, tennis, and golf player. He served for many years as a board member of the Newton Squash and Tennis Club and was an active member of the Neighborhood Club of West Newton. He loved traveling, cooking, and good Asian cuisine. He was an avid Northwestern football and basketball fan, and served as a board member for the Boston region of the University’s alumni leadership council. After retiring in 2021, Ed continued to pursue his passion for design by working on a number of personal architectural projects.

A celebration of Ed’s life for friends and family will be held in the fall. The family is grateful to the excellent medical professionals at Mass-General Brigham, Dana Farber Cancer Institute and Newton Wellesley Hospital.

In lieu of flowers, donations may be made to The Chang and Sylligardos Family Fund for The MGCC (Mass. General Cancer Center) at Newton-Wellesley Infusion Center, Newton-Wellesley Hospital Development Office, 2014 Washington St., Newton, MA, 02462, (617) 243-6243, [email protected]