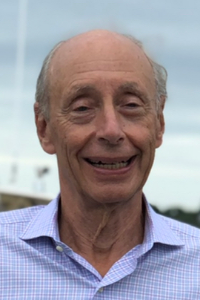 HALE, Martin Of Boston, August 11, 2022. Tall and witty, kind, gentle, and wise except when behind the wheel of a sports car, beloved father, grandfather and husband, Martin Hale is now racing through the open roads of heaven.

Born in New York and raised in New Hampshire, Michigan, and California, Martin attended the Cate School (‘58), Yale University (‘62), and Harvard Business School (‘67). Known by his children as “Ace of Spies” for his vigilant and discerning mind, Martin served in the Army as a Lieutenant in West Germany (1963-‘64). He often mentioned how nicely he lived on a Lieutenant’s salary in post-war Germany and loved his days traveling around Europe in his champagne yellow Porsche 356. After the Business School, Martin joined Putnam Investment Management Company where his deep love of the stock market, growth investing, and mentoring others led him to run the Voyager Fund before becoming the youngest president of the firm and later of its parent company, Marsh McLennan Asset Management.

When the management role took him away from investing and required too much time away from family, Martin resigned to join Hellman Jordan Management Company where he remained an active investor until suffering a heart attack in June. Active on numerous corporate and non-profit boards over his life including Great Lakes Chemical Company, Innospec, The Museum of Fine Arts, Boston and its school, and the Student Conservation Association, Martin was known for his integrity and for being a generous and kind problem solver for people and institutions. He was also an avid art collector, reader, and traveler.

He is survived by his beloved wife Deborah; his sons, Charles and Martin, and his 5 grandchildren. Funeral services will be private. In lieu of flowers, memorial contributions may be made to The Museum of Fine Arts, Boston, and to the Harvard Art Museums, Cambridge. Any remembrances may be posted here: https://www.kudoboard.com/boards/xoRVyELu