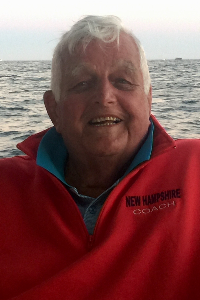 Paul G. McDonald of Needham, MA, formerly of Wellesley, MA passed away peacefully surrounded by family on August 14, 2022. He was 87 years old.

Paul was born in Boston, MA on October 15, 1934 to Mary aka “Molly” (Magee) and Dr. William J. McDonald of Brookline, MA. He was the fifth of seven children.

Paul married Nancy Corcoran of Wellesley, MA in 1958. They were married 57 years until Nancy’s passing in 2015.

Paul is survived by his three Children; Cary Ellen (married to Jeff Ryan) of San Rafael, CA; Tracy (Engquist) of San Mateo, CA and Paul Jr. aka “Mac” (married to Patty) of Imperial, CA – and seven grandchildren; Cassidy and Jesse McDonald-Ryan (twins) of Sacramento, CA, Zack McDonald-Ryan of San Rafael, CA, Oliver Engquist of Denver, CO, Julianne Engquist of Bend, OR, Keenan McDonald of San Diego, CA and Ella McDonald who is attending Quinnipiac University in CT. He is also survived by his friend and companion, Eliane Bruno of Needham, MA

Paul was very dedicated to the Wellesley community – he served as Wellesley Rotary President from 1990-1991 and was Rotary International District 7910 Assistant Governor in 2000-2001. He was the Wellesley Football Gridiron President in 1985. He remained an active St. Anselm’s alumni throughout his life.

Paul spent many summers at his beloved Camp Runamuck in Lake Winnipesaukee, NH where he hosted family and friends from all over the country. His love of the lake remained with him as a guest of nephew, John Mooney on Governor’s Island for the last 17 summers.

In lieu of flowers please kindly consider a donation to either Boston Rescue Mission at BRN.org or Golf for All at golfforall.org.