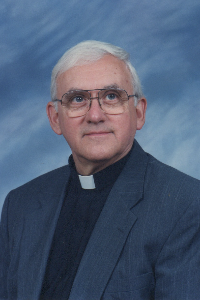 It is with great sorrow and faith in the promise of Christ, that the family of the Reverend Kenneth Orson Bean, age 83 of Webster Massachusetts announces his peaceful passing surrounded by family on August 2, 2022. He was a generous and faithful child of God with a heart so big, it never ran out of room to love and care for others even to his last days. As a Lutheran pastor, his compassion and genuine love for people was apparent in all that he did. While he would say that his 57 years of ordained ministry filled him with blessings beyond measure, we know that he was a blessing to more people than he ever realized. As a husband, father, grandfather, brother, uncle, and friend, he consistently poured out love, faith, and joy for everyone. He did everything with full force, from playing charades and games, to tackling tasks and work around the house, but most of all he loved with full force and everybody could feel it in his presence. He was a faithful friend who cared deeply about the people in his life, making meaningful connections wherever he went. He was always there to offer a listening ear, shoulder to cry on, encouraging words, or share laughter.

Ken was a graduate of Concordia Seminary (1965), then served as a Mission Developer for Good Shepherd (LCMS) in London Ontario (1965-1970), finally serving most of his ministry at Good Shepherd Westborough, MA from 1970-2005. In 1976 he left the LCMS church and was a part of the AELC from 1976-1988 when he then served on the planning committee for New England ELCA, of which he joined and remained an ELCA minister throughout his life. During this time he served as a part-time chaplain for the Lutheran Rehabilitation and Skilled Care Center in Worcester (1978-2021), as well as several years as chairperson of the Westborough Clergy Association, among many others. Looking back on the many ways and places he was able to serve, he said “what I did in ministry was largely strengthened by the love and unfailing support of my dear wife, Patricia (Neulieb) Bean whom I married in 1963.”

Ken leaves behind his loving wife, Patricia Bean after 59 years of cherished marriage, and four children; Deborah Harvell, Daniel Bean and his wife Debora, Michele Pavlis, and Mark Bean. As well as seven grandchildren including; Jessica Recore and her husband Richard, the Rev. Nicole Harvell, Courtney Pavlis, and Chiara & Lucia Bean. He was predeceased by his five siblings, and leaves numerous nieces/nephews behind.

A viewing will take place at Miller Funeral Home in Webster on Friday August 12th between 4pm-7pm. The funeral will be held on Saturday August 13th at 10:00am at Good Shepherd Lutheran Church (183 W. Main St. Westborough, MA) with a brief reception to follow. All are invited to attend the graveside burial in Mount Zion Cemetery in Webster at 2:30pm on Saturday August 13th. Donations can be made to Zion Lutheran Church Memorial Fund (70 Main St., Oxford, MA 01540) or Good Shepherd Lutheran Church Memorial Fund (183 W. Main St., Westborough, MA 01581), or Ascentria Care Alliance (Worcester, MA).