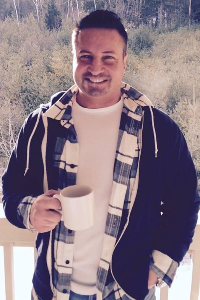 Mark E. Bondra, 50, of Londonderry, NH died unexpectedly on Thursday July 21, 2022 while vacationing in the lakes region. Mark was born on October 23, 1971 in East Chicago, IN, a son of Michael and Mary (Piekarczyk) Bondra.

Mark was a loving husband and father. Mark always put his family and friends first, regardless of the situation. He was a protector, provider, and confidant to so many people around him. Mark would always have an upbeat attitude which made everyone around him better. He was known to be reliable, honest, and loyal person one could ever meet. His service to our country, to his community, family and friends was admirable, to say the least. In his work life, he was looked up to by so many. Always caring to make those around him better people, he succeeded. Mark leaves behind an indelible footprint and path of love that we all strive to leave. He spent all of his time with his wife Kelly and his children. Wherever Kelly was, Mark was not too far behind, usually right by her side. They loved going out to eat, taking trips together and doing fun things with the kids.

Mark served in the US Army during the early 1990’s as part of the 10th Special Forces, becoming an extreme cold weather ski instructor, and receiving his parachutist wings. Mark worked for Envoy Mortgage for the last 7 years and has been in the mortgage industry for 25 years. Mark was loved by all his co-workers and all say he was the most kind hearted, selfless, genuine, hard-working person they know. Most people he has met whether through business or personal friendships always said the same thing and how much they look up to him as a mentor.

Mark also loved taking his son Jaden to his baseball practice and games, keeping track of Hailey and Kayla‘s shopping and making root beer floats with Avery before watching the kids play just dance. He enjoyed watching football games at home with his friends and most of all he loved working out at home or the gym. He will be greatly missed.

Calling hours will be held on Thursday July 28, 2022 from 4 – 7pm in the Peabody Funeral Homes and Crematorium, 290 Mammoth Rd., Londonderry. A time of sharing will be held on Friday morning at 10:00am in the funeral home. Burial with military honors will follow in Pillsbury Cemetery, Londonderry.

Due to a family member with a severe allergy, the family requests that those in attendance refrain from wearing perfume or cologne.

In lieu of flowers, memorial donations may be made to: https://www.gofundme.com/f/mark-bondra-and-family?qid=cba3cf80168c3a4fc685e3c2dffb13f9/