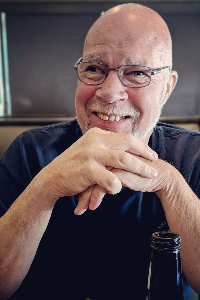 James D. “Donny” Smith, 69, passed away peacefully on Thursday, July 14, 2022, at Chestnut Woods Rehabilitation Center in Saugus surrounded by his loving family. Born on May 28, 1953 in Winthrop, he was the cherished son of the late Millard F. “Smitty” and Hilma “Lucille” (Barker) Smith.

A lifelong resident of Winthrop, Donny graduated from Winthrop High School in 1971, where he played football. After high school, he attended ITT Technical Institute. Donny worked at Duplin Marine in Winthrop for many years where, alongside his brother Skip, they took pride in building Star class sailboats that raced all over the country. Despite this, Donny used to joke with Skip that “if it doesn’t have an engine, it’s not a boat."

Donny also worked at Pilot Air Freight in East Boston for more than 25 years in outbound operations where he was a valued employee and friend.

No matter where he was, Donny’s heart was always in Winthrop by the Sea. He was happiest spending time by the ocean, viewing a beautiful sunset or thunderstorm, stargazing, and fishing — he was always trying to catch the big one! He was also an avid Boston sports fan, particularly of the New England Patriots.

Donny loved life and never took it for granted. He always had a smile on his face and had the best sense of humor, which he passed on to his children. He will be deeply missed.

Visiting hours will be held at Maurice W. Kirby Funeral Home, 210 Winthrop Street, Winthrop on Tuesday, July 19th from 4:00pm to 7:00pm. Friends and relatives are invited to attend. Funeral services will be private. Donations can be made in Donny’s memory to www.mds-foundation.org.