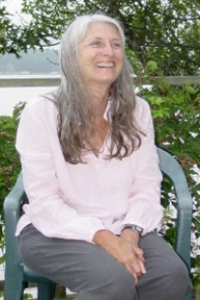 Joan “Joanie” Wicks Gillette, of New Haven, CT, died peacefully at home on June 18, 2022, after a long battle with Alzheimer’s, one she faced courageously and gracefully.

A life-time educator, she began her career at James Hillhouse High School in New Haven, then taught at High School in the Community, helped start the Wilbur Cross Annex before joining with colleagues to win a charter for Common Ground High School, the first environmental school in the nation. As a teacher, she was dedicated to the intelligence she knew her students brought to her classroom and was relentless in finding ways for their brilliance to shine, whether reading aloud existential literature to engage student debate on the purpose of life or reciting Walt Whitman’s Ode To Compost as her students mixed manure and straw in bins. She believed that when young men and women had important things to say to the world, they would master the basics of writing and grammar they had missed along the way in order to be heard. A gifted curriculum writer, she developed multiple courses that combined her own discipline of English Language Arts with science, history, mathematics, and the arts.

She was deeply connected to the earth, wearing shoes only when necessary. She was most at home in her garden or in her sailboat on the sea. An early advocate for the environment, she read widely the works of Wendell Berry, David Orr, and Bill McKibben. She insisted that we practice what we advocated resulting in heating our house with wood and installing a composting toilet. She was proud of Common Ground and grateful to so many people, especially those that were there in the early hard days and those who continue to move it forward

Joanie was born in Fall River, MA on September 4, 1947, to the late David and Caroline Wicks. She is survived by her husband of more than fifty years, Jack, daughters, Cory Rinzler and Susannah Mills, sons-in-laws Jeremy Rinzler and Charles Mills and two grandchildren, Jasmine Rinzler and Aiden Mills, as well as two sisters, Valerie Miller, and Sally Dey.