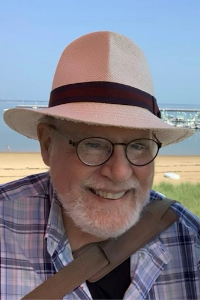 Neil E. Dugas passed away on June 10, 2022, at his residence in Cambridge, MA, after a valiant three year battle with Myelodysplastic Syndrome (MDS), a blood cancer that affects the bone marrow.

Neil was born in Foxboro, MA, and attended Mercymount Country Day School in Cumberland, RI, and Xaverian Brothers High School in Westwood, MA, where he graduated as salutatorian of his class. He then went to Boston College on a full scholarship, but in 1970, transferred to Boston University to pursue a degree in music history. After graduating, he moved to Cambridge, MA, where he made his home for 45 years.

Neil was also a professional organist. While in his twenties, he began to play for many churches in the Boston area. His last public performance was on Easter Sunday, 2019, at St Paul's Church in Malden, MA. The next day he was diagnosed with MDS. Despite undergoing a stem cell transplant in June, 2020, his MDS recently progressed to acute leukemia, ultimately taking his life.

A big part of Neil's life was singing in the Boston Gay Men's Chorus, which he enjoyed for 12 years. He had a beautiful, deep bass voice. One of the highlights was a tour to the Middle East in 2015, where the group performed in Jerusalem, Tel Aviv, and Istanbul.

When Neil wasn't working or singing, he enjoyed traveling. He visited several countries in five continents during his lifetime. By far, his favorite trip was to Egypt in 2011 to see the pyramids. If you knew Neil, this was no surprise. As a youngster he attempted to build his own brick 'pyramids' behind the shed in the backyard. The structures sometimes towered several feet above the roof of the shed, the peaks being visible from the street.

Neil was also a tourguide in Boston. He volunteered with 'Boston By Foot' for ten years, providing tours of the Freedom Trail during the May-October season.

Neil was an avid bridge player, and enjoyed attending the opera and symphony concerts.

Neil has been like a cat with nine lives. He is a rare survivor of metastatic melanoma, diagnosed in 1996, and he was also the first person in Massachusetts to contract West Nile Virus in 2014 after being bitten by a mosquito in Connecticut.


Neil's intelligence, humor, and witticisms will be missed by all. He leaves behind a sister, Jane Dugas of Dover, NH; a brother Dr Kevin Dugas & his wife Linda of Lee, NH; a niece Kim (Dugas) Hopwood & her husband Mike & son Mason of Pike's Peak, Vermont; and 3 great-nephews Ethan, Cole, and Jack Fox of Dawsonville, Georgia. He also leaves behind many relatives and wonderful friends. He is predeceased by his parents, Victor & Helen Dugas of Foxboro, MA, as well as his niece, Kristen (Dugas) Fox.

A Memorial Service for Neil will take place at Old South Church in Boston, MA, at a later date.