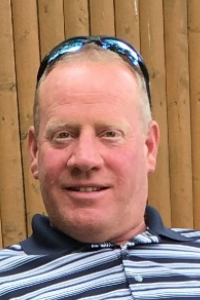 Andrew P. McInnes, 56, of Derry, NH, passed away Wednesday, April 13, 2022, in the Portsmouth Regional Hospital, Portsmouth, NH. He was born on April 8, 1966, in Beverly, MA, the youngest child of the late William and Barbara (McCarthy) McInnes. Andrew was raised and educated in Groveland, MA, and has spent the last 25 years in Derry where he was the proud owner and operator of Steven’s Auto Service in Derry.

He is survived by his wife and sweetheart of 22 years, Judi McInnes of Derry; two sons, AJ McInnes and Justin McInnes, both of Derry; four grandchildren; Cami, Vivienne, Anna, and Elise, four brothers, William Jr. and Anne McInnes of Limerick, ME, Barry and Diane McInnes of Dracut, MA, James McInnes of Groveland, MA, and Peter McInnes of Clearwater, FL; one sister, Judy Legacy of Haverhill, MA. Andrew was predeceased by four siblings: Robert, Bruce, Jon and Sandra. He was adored by his many nieces, nephews, and in-laws.

For those lucky enough to know Andrew, you would know he loved time with his wife and family (especially his “grandbabies”), friends, and virtually everyone who had the pleasure of his company. He was a true sports fan, but the New England Patriots were a particular favorite. He was an avid golfer and recently took a “bucket list” trip to hit the links on the finest courses there are. He loved his time at home living the “lake life” at his fire pit and on his deck boat, and the many hours he snuggled his dogs, Rocko and Titus. He will be forever known for his humor, his helping hands, his sheepish smile, and his endless love of all things fun.

Calling hours will be held on Monday, April 18, 2022 4 – 8pm in the Peabody Funeral Homes and Crematorium, 290 Mammoth Rd., Londonderry, NH. Funeral services will be held on Tuesday at 10:30am in the funeral home with cremation to follow. In lieu of flowers or in addition, memorial contributions may be made to American Stroke Association in Andrew’s memory.