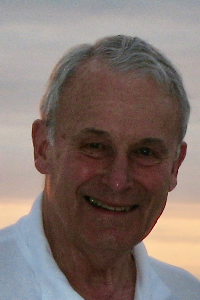 Gordon graduated from The Hill School and then Williams College where he played lacrosse, ski patrolled and was a proud and loyal member of the class of 1951. After college he served as a lieutenant in the Navy on The USS Olmstead in the Mediterranean. He married Karen Brown in 1954 and settled in Simsbury, CT where they raised their two daughters. He retired in 1994 as Business Manager of The Ethel Walker School. Karen predeceased him in 2010.

Gordon was an Eagle Scout and an avid outdoorsman. He was a particularly keen hiker and a highly-rated Appalachian Mountain Club (AMC) whitewater paddler and trip leader. In retirement he and Karen moved to Falmouth, ME where he was an active member of several land conservation organizations and a devoted steward of Karen’s family home on Casco Bay. Gordon also volunteered for years as an AMC trail “maintainer” becoming a certified sawyer and clearing and maintaining a section of the of the Appalachian Trail in Carrying Place, Township, ME.

Gordon was a life-long supporter of the American Red Cross donating countless pints over the years and in retirement became a platelet donor.

His memorial service will be celebrated on Saturday, June 4th, 2022, at 11:30 AM in the State Street Church, 159 State Street, Portland Maine. Arrangements were entrusted to the Burke-Magliozzi Funeral home, Andover, MA.

The family is grateful to the staff of The Meadows at Edgewood Retirement Community for the gentle care they provided Gordon.

Donations in Gordon’s memory may be made to Boy Scouts of America, Pine Tree Council or Maine Appalachian Trail Club. All who knew and cared for him are encouraged to donate blood with The American Red Cross. For additional information, please visit, www.burkemagliozzi.com.