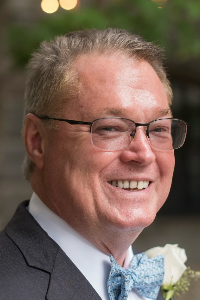 Ron is survived by his wife Denise of thirty-seven years, his children, Megan and her husband Adam, Ryan and his fiancé Meredith, Caitlin, his first grandchild, Noelle, and many beloved nieces, nephews and extended family. Ron was preceded in death by his parents, Horace and Ruby, and his brothers, Victor, Norman and Stanley.

Ron was born in Many, Louisiana, as the youngest child of Horace and Ruby Tompkins. Ron always spoke fondly of his childhood growing up in northwest Louisiana. His father, Horace, was the president of a local bank and his mother, Ruby, was an elementary school teacher—and, specifically, Ron’s fifth grade teacher. His parents instilled in Ron the value of education and the importance of using one’s talents to contribute meaningfully to society.

Ron graduated as valedictorian of his Many High School class and went on to Tulane University where he graduated in three years with a double major in mathematics and chemistry. Ron then attended Tulane Medical School and was accepted into the surgical residency program at Massachusetts General Hospital (MGH). During his surgical residency at the MGH, Ron earned a doctorate in chemical engineering at Massachusetts Institute of Technology with the help of his unpaid lab assistant and dissertation copy editor, Denise. He completed his Harvard surgery residency and joined the surgical faculty at MGH in 1987.

Ron went on to have an illustrious career as a surgeon. He was the Sumner M. Redstone Professor of Surgery at Harvard Medical School and the former Chief of the Division of Burn Surgery at the MGH. He also served as the Chief of Staff of the Shriners Hospital for Children in Boston for 22 years, where he met his wife, Denise. Colleagues and subordinates knew him for being extraordinary kind in an era when it was not generally the culture of surgical training programs.

In addition to his surgical career, Ron was widely recognized for his work in translational science, medicine, and engineering with a focus on inflammation and metabolic features of humans in response to severe stresses. Ron led one of the largest and most successful research grants from the National Institutes of Health, the Inflammation and Host Response to Injury Grant known as “the Glue Grant,” which led to improvements in survival, reduction in morbidity for injured patients, and established benchmarks for care in the fields of burns and trauma. In addition, Ron was a pioneer in outcome studies and quality of life for burn victims. His motto was “GPB” (Get People Better).

Ron has been honored by many societies throughout his career for both his clinical surgery and his innovative science. He has published more than five hundred articles in both medicine and engineering journals. Papers Ron has authored are credited with over 50,000 citations. He was elected as a Director of the American Board of Surgery in 1994 and served for six years. He has received multiple honors including a fellowship from the American Institute for Medical and Biological Engineering and an honorary M.A. from Harvard University. He has served as an officer, including as president, and board member of more than a dozen national and international academic societies. Ron has also served on the boards as a scientific advisor to numerous start-up companies in a vast array of medical applications including treatments for Alzheimer’s Disease and point-of-care diagnostics.

Following his decades of significant clinical and basic science discovery, Ron was the founding director for the Center for Engineering in Medicine & Surgery at MGH, a center for research and innovation, which has translated scientific applications into multiple inventions and companies. The center promotes the development of new approaches to healthcare delivery and personalized medicine, minimally invasive therapies, as well as a myriad of new technologies such as re-engineered organs, smart nano-pharmaceuticals and nano-diagnostics, and living cell-based micro-fabricated devices for diagnostics, therapeutics, high-throughput drug screening, and basic and applied biomedical investigation.

More recently, Ron became involved in the Myalgic Encephalomyelitis/Chronic Fatigue Syndrome (ME/CFS) project of the Open Medicine Foundation (OMF) and became passionate about improving the care of this special patient population. He joined the OMF Scientific Advisory Board in 2014 and he became a co-director of the OMF in 2017.

Outside of his clinical and scientific pursuits, Ron enjoyed travel, wine and spending time with friends and family. He often claimed to have flown “a billion” miles on his most favored airline, a typical exaggeration (it was actually 4 million). Ron travelled frequently, often as an invited speaker at medical and scientific conferences, but he preferred to take his family with him whenever possible, including to destinations such as Egypt, South Africa, India, Brazil, Australia, China, Japan, Southeast Asia and all over Europe and the U.K. He recently enjoyed his 70th birthday spent with Denise in Napa Valley.

Ron’s favorite activity was visiting with friends, both old and new. He enjoyed dinners out at a new place or just drinks and “tapas” (by Ron’s definition) at one of his favorite places, if that is what the occasion called for. In summer evenings, Ron could often be found sitting with Denise at their cabana at the Charles River Park Pool catching up with all the regulars. Ron and Denise also loved hosting dinner parties for family, friends and colleagues.

Above all else, Ronald enjoyed his family whom he loved deeply and of whom he was very proud. A highly accomplished man, the only boasts he ever made to anyone were about his children and grandchild. Ron recently ran into a friend outside North Station and he insisted that she needed to come over right away to meet his remarkable ten-month-old granddaughter. He was sure she would be very impressed.

Visitation will be held at St. Joseph’s Church in the West End on Saturday, January 22nd from 10am to 12pm followed by a funeral mass at noon. In lieu of flowers, donations in Ron’s memory may be made to the Open Medicine Foundation. Your donation will continue Ron's legacy by supporting research at the Ronald G. Tompkins ME/CFS Collaboration at the Harvard Affiliated Hospitals.