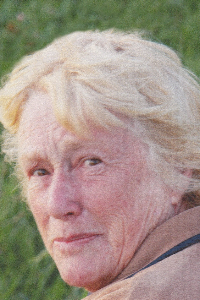 Take a traveler, sailor, singer, birder, gardener, florist, cook, sister, mother, grandmother, and friend - toss it with a zest for life, and you have the essence of Barri Throop.

Milicent Barrett Throop, born December 8, 1933, of Westport, Massachusetts passed away on Christmas Eve, 2021 after struggling stoically with dementia for over ten years.

She was the daughter of the late Milicent E. Tuckerman of Westport, Massachusetts, and James P. Whittall of Grafton, Massachusetts.

Barri had made homes in Huntington, NY, Mahwah, NJ, Charlotte, NC, as well as Long Valley and Bernardsville, NJ before finally settling in Westport, Massachusetts.

Barri had many titles in her life. She was a stewardess for Northeastern Airlines, where she met her first husband, pilot Robert Leo Therrien. “Mom” became her title shortly after this, then owner of the Moby Dick Wharf Restaurant (now The Back Eddy) in the mid 70’s. The restaurant business didn’t quite fit Barri, so she pursued her love for gardening and horticulture with help from her lifelong friends Joe and Sally Keith at Horseneck Nurseries in Westport, Massachusetts. Her horticulture career grew to include roles as manager at Barnyard Gardens in North Dartmouth, Massachusetts, and Retail Division Manager at G. Bourne Knowles Garden Center in Fairhaven, Massachusetts. She also worked as a florist at Lee’s Supermarket in Westport, Massachusetts, and taught classes in floral arranging and herbs. Finally, she became well known as ‘The Jam Lady’ at The Westport Farmer’s Market with her unique jams and jellies. She also made artistic and memorable wreaths and dried arrangements.

Barri was an adventurer and didn’t hesitate when asked to be crew on the sailboat Adagio with Montgomery Throop, who would become her second husband and the love of her life.

Barri dedicated many hours to her other interests, including the New England Unit of The Herb Society of America, The Westport River Gardeners, The Garden Club of Buzzards Bay, The Sippican Choral Society, The Westport Beach Committee, Mass Audubon, Dartmouth Natural Resources Trust, and The Paskamaskett Bird Club.

She traveled the world to satisfy her love and curiosity about birds and different cultures.

She is survived by her step-sons Montgomery Throop, Jr. and Chris Throop of Florida. She is also survived by many nieces, nephews, and countless friends including close friends Lyn Keith and Cleo Fortier.

The world will miss this strong, independent woman with a big heart and a mischievous sense of humor.

A Celebration of Barri’s Life will be held when the flowers bloom and the birds are in full song in the late spring.