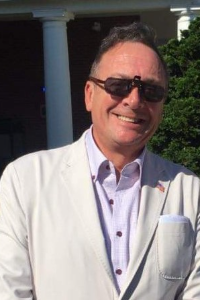 Andrew Mario Bissanti, 64, of Franklin died peacefully January 7 at Milford Regional Medical Center surrounded by his beloved wife and 3 girls. He was the husband of Christina M. (Lombardi) Bissanti for the past 35 years.

Born in Milford, September 4, 1957, the son of the late Andrew E. and Gloria (Dubbiosi) Bissanti, Mr. Bissanti had lived in Franklin for most of his life.

Andrew was a graduate of King Philip High School, Dean College and the University of Denver. During his educational tenure at University of Denver, Andrew earned a Bachelor of Arts in Political Science and Mass Communications. He went on to earn other degrees in Architectural Design and Construction Management.

He owned and operated Bissanti Real Estate and Appraisers in Franklin for many years.

Andrew was committed to continuing his valiant efforts in supporting community organizations such as the homeless, our local Veterans, and Gilly's House Rehabilitation Center. His passion was to help make Franklin a better place, especially for those individuals in need.

Andrew enjoyed boating in Boston, fishing, riding his motorcycle, being with his family, and having his dog, Brody with him.

In addition to his wife he is survived by his daughters, Francesca, Vanessa, Serena Bissanti of Franklin.

He is also survived by his grandchildren, Joseph, Isabella and Mila.

Calling hours will be on Thursday from 4 -8 p.m. in the Ginley Funeral Home of Franklin (www.ginleyfuneralhomes.com) 131 Main Street, Franklin.
Face masks are required at the funeral home and in St. Mary’s Church.

In lieu of flowers, donations may be made in his memory to the Bissanti Family Grandchildren’s Fund at Dean Cooperative Bank, PO Box 307, Franklin, MA 02038.