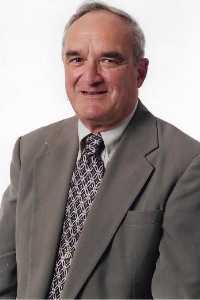 John (Jack) Waters died on December 29 at age 94, after enduring bladder and colon cancers for over 30 years caused by exposure to radiation during the nuclear tests at Operation Crossroads on the Bikini Atoll in 1945.

As a young man, at age 17, he joined the navy in the last year of the Second World War. In joining before he was eligible for the draft, he was able to choose the navy instead of being drafted into the army. He served on the USS Arikara (salvage and rescue ship) in the battle of Okinawa amidst Kamikazes. On one of his missions during which he saved a ship from sinking by pumping water from its hull all night he earned a citation for his bravery from the Admiral of the Pacific Fleet.
The sea had always been important to him since as a boy when he spent his summers on the coast of Maine. It was there that he learned to be an avid rower a skill which he practiced into his late 80’s on the East branch of the Westport River.
At the war’s end, his ship was overcome by a typhoon in the South China Sea. They were fortunate to survive this terrifying experience yet after this he still loved to be at sea, crossing the Atlantic many times and the Pacific as well. He revisited China, where he had been stationed after the war and was very glad to see how conditions had improved for its people.
In China, he saw freezing people suffer while foul weather coats from the service men were burned as they left. Later in his life, he experienced seeing black men serving in a resort being treated unkindly by people who were being rewarded for their insurance sales. These experiences led him to make a major change in his life.

From eight years of retailing and two of insurance selling, in his words: “I was looking for someone I would believe in and look up to. I looked to Jesus! Bible study helped me focus and taught me discernment.”

This change in direction led him to earn three graduate degrees from Andover Newton Theological School; Bachelor of Divinity, Master of Sacred Studies and a Doctorate in Ministry.These were in addition to his undergraduate degree from Boston University in Business where his father was dean of the college of Business Administration.
Subsequently, he became a licensed psychologist. He served as a pastor in two churches, eight years achaplainin a mentalhospital then as a pastoral psychotherapistand clinical director in five counseling centers.

During this time, he was a founder of the American Association of Pastoral Counselors for which he became a supervisor. He led groups of medical staff, priests, nuns and other ministers in hospitals and counseling centers, helping them to focus on people’s needs where they were and to find wholeness which he believed is our deepest need.

He loved his wife of 43 years,Sara, and that love lives on in her.

Many grandchildren reflect this wonderful man. Ten of them are growing in his care and pride in them. And his three great grandchildren will grow to know him as well.

He lives on, not only in us, but in his beautiful photography. His breaching whales, vividly colored flowers, scenes of the sea and of St Michael’s Mount in Cornwall, England (where his grandparents immigrated from) are a treasure. As is his magnificent yard, filled with roses, lilacs,and ever blooming magnolia, Gingko trees and iris. He planned the garden so that something bloomed continuously from the hellebore in February to the reblooming iris in the fall.

He leaves everyone who knew him blooming with his presence. His life will be celebrated in a private service and interment in the early spring.