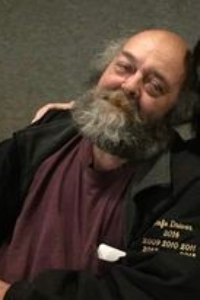 Tom had a big heart and sparkling blue eyes who loved to laugh and joke around.

He was always there to help family and friends whenever anyone needed it.

The most important thing to him was his love for his wife of over 38 years Elizabeth (Taylor) Adams, his son Ryan C. Adams, daughter Kerri J. (Adams) DePina both of New Bedford, and son Derek L. Adams of South Dartmouth.

The light of his life were his four grandchildren Collin, Cheyenne, Carter, and Carissa.

He loved playing Santa for them and watching them grow. and play.

Tom was the eldest son of the late Judith A. (Flood) Adams and Earl L Adams. Brother of Terri (Adams) Serpa of Fairhaven, and Kimberly (Adams) Cambra and Kellie (Adams) Macomber both of New Bedford, Scott Adams of Georgia, and the late Mark Adams also of New Bedford.. He also had many nieces and nephews.

Tom graduated from the old New Bedford Voke in 1976 from Welding and Fabrication Shop.. He worked many years at Mid-City Auto Parts as counter help at both Purchase St and Emerson St locations and as an on the road salesman.

Tom graduated from New England Tractor Trailer Training School and remained employed with the first company to hire him for over 30 years - Pray Trucking of Seekonk MA later renamed Ocean Express LLC. Watching them grow from just a few trucks to a whole fleet.

He traveled all over New England delivering produce in the mornings and in the afternoons would pick up seafood here on the New Bedford Waterfront that would be delivered nightly to Seafood Markets all down the East Coast.. He made many friends on the waterfront over the years and had fond memories from his 30 yrs working there with everyone from office help to dock workers, supervisors and owners.

Beside his family and friends his next love was working on cars. Being self taught he began learning to work on cars at age 14. He could fix anything from motors and transmissions,suspension, to paint and body work. He spent 2 years working nights to restore from the ground up a 1966 Cadillac Convertible that had once belonged to his Mom. He maintained his love of Cadillacs and Fords all his life having owned many over the years.Often joking with his wife, sons, and grandson about them.

Tom was a real family man who always put them before any and everything.

He had one request and that was that he be remembered for the good times, the happy times, and the times he made people laugh and laughed with them.

Donations to St Jude or The Diabetes Foundation in his honor instead of flowers would be appreciated.

Private arrangements will be held at the convenience of the family.