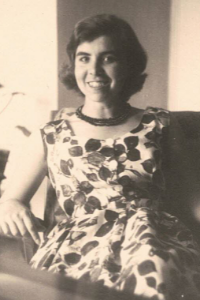 Klara was born on August 12, 1931 in Homburg, Germany, a small town in the Saar on the French border. Klara experienced the deprivations of war as a child which left her traumatized for the rest of her life. Klara recalled frequently running from her school to bomb shelters at the sound of air raid sirens, climbing over rubble and huddling in a dark cellar until the bombs stopped falling and the all-clear siren was heard. Twice, bombs destroyed her family’s home along with all their belongings, forcing them into homelessness until new living arrangements could be found. Shortly after WWII ended, Klara’s only sibling, Irmgard, died at the age of 14 from Scarlet Fever. Klara became a Registered Nurse and specialized in caring for newborns and infants at a children’s hospital in Germany before moving to Paris where she worked for several years as a private nurse and governess. From this first career, Klara held a lifelong passion for medicine and a fondness for infants. Klara went on to work for the Norwegian Cruise Line which allowed her to travel widely through the Caribbean and the Americas. She lived in New York City in the mid-1960s where she studied commercial photography at the New York Institute of Photography. It was during this time that she first travelled to Provincetown after learning of the town’s vibrant art community. Klara fell in love with the beauty of Provincetown and moved here permanently in 1967. Not long after her arrival Klara purchased the Mayflower Colony cottages on Beach Point and Mayflower Apartments on Bangs Street. Klara ran the Mayflower Colony and Mayflower Apartments until 3 years ago when she retired. Her dear friend, fisherman Raymond Duarte often leant a hand to help maintain the properties and drop off fresh fish for Klara whenever he could.

Those who took the time to look beyond Klara’s sometimes turbulent temper found a well-educated, intellectual, fluent in three languages, who held herself and others to exceptionally high standards. A fiercely independent woman, Klara had a curious mind, a sharp sense of humor, a keen aesthetic sensibility, and a generous nature with friends. Klara suffered no fools and if you were a fool, she would let you know it. Klara had mixed feelings about Provincetown; she loved its natural beauty, its art scene and some of the longtime residents and visitors she met over the years. But there were many times when she was harassed or belittled for her strong German accent and her national origin. Still, others were kind to Klara. They looked after Klara in her later years, escorting her home at night, bringing her dinners, driving her to appointments or just chatting with her when she visited the many shops on her daily walk. Klara was always expressed how very grateful she was for the kindness shown by these people.

Klara was predeceased by her father, Johann Muller, her mother Margarete Muller (Krauer) and her beloved sister Irmgard. Klara leaves behind many dear friends whose kind gestures over the years were deeply appreciated.

A private burial will be held for Klara in Provincetown Cemetery. A Memorial Service will be held at a time and date to be announced.