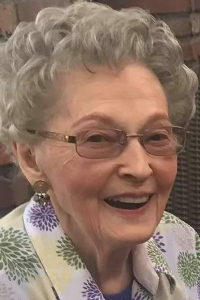 Martha Evelyn Boicourt, Brumm of Camarillo, California, passed away peacefully at home on Thursday, September 30th, 2021. She was a beloved mother, grandmother, great-grandmother and aunt. Martha was 103.
Martha was born in Madison County, Indiana, to Clayton and Lena McClintick on July 17th, 1918. She spent her childhood on a farm and graduated from Anderson High School in Anderson, Indiana, in 1936.
In 1941 Martha married Robert (Bob) Boicourt, her high school sweetheart, where the two settled in California. They had one daughter and were happily married for 24 years until Bob passed away suddenly in 1965.
In 1967 Martha met William (Bill) Brumm, and the two were married in 1968. Bill and Martha enjoyed 31 years together, traveling and visiting with their blended family of Bill's three daughters and Martha's daughter. Their family grew to include sons-in-law, grandchildren, and great-grandchildren. Bill passed away in 1999.
A 40-year resident of Ventura County, Martha enjoyed homemaking, gardening, and needlework, as well as her daily crossword puzzle accompanied by a glass of wine. She was a talented artist who loved working with watercolors, sketching with charcoal, China painting, and painting with oils. She attended classes at the Camarillo Art Center. In her later years, Martha especially enjoyed exercising, line dancing, and socializing with friends. She was a long-time member of a 'Bone Builders' exercise group in Camarillo. Her family and friends will miss her sense of humor and cheerful personality.
She is survived by daughters Melanie Billig of Carmel, Marjory Longoria of Camarillo, Shiara Kirsch of Cave Creek, Az. and Virdette Brumm-Parkman of Pebble Beach; granddaughters, Nicole Pazdan, Rayanne Ragle and Ariana Muth; great-grandchildren, Monty Jr., Nathan and Caleb Contente, Jack Coria and Gabriella and Dalton Muth; nieces Barbara Plake of Frankfort, Indiana, Kathy Murray of Windfall Indiana and Cindy Idlewine of Windfall, Indiana.
Martha is preceded in death by two loving husbands, parents Clayton and Lena McClintick, and sister Annabelle Pedro. The family will hold a private service at Ivy Lawn Memorial Park in Ventura. A celebration of Martha's life will be held in early Spring, 2022.
The family would like to give a special thanks to Mission Hospice, Ventura, for the excellent support and care given to Martha and her family in her final months. In lieu of flowers, please consider making a memorial donation to the American Heart Association or to Mission Hospice.

Arrangements are under the direction of the BOYKO & REARDON TELEGRAPH ROAD MORTUARY & CREMATION, Ventura.