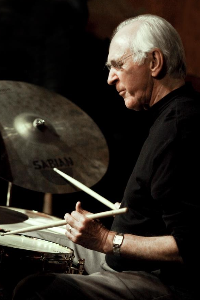 COLIN JAMES BAILEY, 87 YEARS OLD, of Port Hueneme, Cailfornia, passed away on September 20, 2021 at home in Port Hueneme, California.
Colin Bailey was born in Swindon, England to James and Evelyn (Jinks) Bailey on July 9, 1934. He went to school at Stratton St. Margaret, and studied piano and drums at the Modern School of Music and Dance.
His professional career began at age 18 when he toured with Pianist Winnifred Atwell as her drummer. He had a very successful career for the next 68 years as a world renowned Jazz drummer working in clubs, studios and television. He is the drummer on more than 100 albums and his last tour was in 1998 with singer Joe Williams, but he continued to perform at clubs and concerts until he was 86. He wrote 3 educational books on drum technique, including the well known Bass Drum Control which has been published for more than 50 years. He has left a giant legacy for musicians, drummers and music lovers.
He is survived by his wife Lauren Michele Munro Bailey of Port Hueneme, California, and 4 cousins - Louise Jinks, Glenys Collette, Melvyn Jinks, and Maurice Tull, 6 nieces, Corinne Smith, Natalie Western, Adrienne Moore, Shauna Connor, Kerry Wakefield and Lorraine Bizley, and 6 nephews, Jules Smith, Alfie Robinson, Luke Robinson, Nick Connor, Simon Connor and Darren Comley.
His death is preceded by his parents James Bailey and Evelyn Jinks, and his 1st wife of 56 years, Janet Bailey.
In lieu of flowers memorial donations may be made by supporting live music, especially Jazz and Classical performances, and getting vaccinated for Covid-19.
Funeral arrangements have not yet been decided, due to Covid-19 restrictions.Arrangements are private and under the direction of the JOSEPH P. REARDON FUNERAL HOME & CREMATION SERVICE, Ventura.