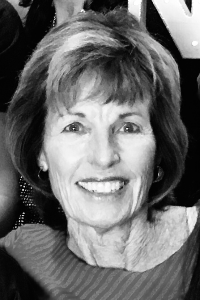 Sheila Beth Ewin (74) of Ventura died September 10, 2021 in her home with her family at her bedside. She went to be with our Lord after a three-month bout with a rare form of cancer.

She was born March 8, 1947 at the University of Iowa to Larry and Helen Hurley. Her father was a Navy pilot and worked in aerospace. The first 13 years of her life she lived in eight cities, and six states all over the United States. She graduated from Redlands High School in 1965 and graduated from UCLA in 1969 majoring in Bacteriology. She completed her post graduate study at USC Medical Center and earned a certificate in Laboratory Technology. While at UCLA she was a member of Pi Beta Phi sorority. She met her husband, Ray Ewin, her first month at UCLA in the dorms and they dated for 3 ½ years until they were married on March 22, 1969. Three weeks after their marriage, Ray was drafted into the Marine Corps. However, the Lord provided and they enjoyed an abundantly blessed 52 ½ years of marriage. Sheila lived a life dependent on our Lord and Savior and was able to bless the lives of countless people through her work in the medical field, bible study, sewing and cooking for missions and ministries, participating in food outreach, and serving as both an elder and deacon at Community Presbyterian Church.

Sheila was athletic and enjoyed many outdoor activities. She was an accomplished snow and water skier. She enjoyed hiking, biking, kayaking and walking all her life. She met many people walking along the Ventura Promenade. Sheila and Ray travelled many times the past 30 years and have many special memories of Europe, the Caribbean and Canada.

Sheila was the Laboratory Director at Buena Ventura Medical Clinic for many years, and retired 20 years ago. She was a beautiful and caring wife, mother, grandmother, daughter and sister and continually blessed the entire family.

Sheila is survived by her husband Ray Ewin and daughters Marci Worthy (married to John) and Alisa Anderson (married to Matt) and four grandchildren Siena Worthy, Drew Worthy, Kyle Anderson and Jason Anderson. Additionally, she is survived by her mother, Helen Hurley (100) and brothers Ken and Lee Hurley (married to Laureen). She is preceded in death by her father Larry Hurley, her sister Betty Pelka and her sister-in-law Janie Hurley.

In lieu of flowers, memorial donations may be made to Community Presbyterian Church. The family is deeply humbled by the overwhelming prayer support and beautiful letters about Sheila’s impact on their lives. Thank you to the loving hospice support by doctors Lisa and William Rajala. A celebration of Sheila’s special life will be held at Community Presbyterian Church located at 1555 Poli Street in Ventura on October 23 at 11:00 AM.

Arrangements are under the direction of the BOYKO & REARDON TELEPHONE ROAD MORTUARY & CREMATION, Ventura.