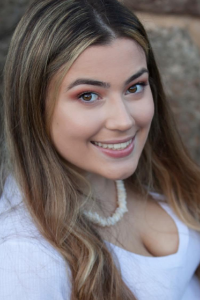 Kiara was born on November 7th, 2001 in Norwood, MA to Maisha Curl and Edmund Miranda, III. She was a lifelong student in Taunton, MA and a graduate of Taunton High School in 2020. She was a student at Bristol Community College studying finance.

Fiercely loved by her parents, Maisha and Ed, She was their *Bug*, Daddy’s little girl and her Mom’s best friend.

Kiara was passionate about astrology. She excelled in the art of makeup and impressed everyone with her talents. She also enjoyed soccer and was really good at anything she loved. She loved animals and was especially devoted to her fur babies.

The idea of making you happy, made her happy, because that was the kind of person she was.

Kiara was many things to the people who loved her and whom she loved. She was looked up to by her cousin Sadie who would light up when Kiara entered a room. She was “Ra Ra” to her Auntie Chelle, and her Aunt Lauren’s “person”. Kiara was like a daughter to her Uncle Brian and Auntie Jen. She was the most loved sister to Kelsie, even in the morning when she had a shitty attitude. Kiara was the very best friend to her Mother. She shared a special love for the Uncle Cracker song “Smile” with her Father. Kiara was better than the best and all who knew her were lucky to just linger in her light.

Kiara made an impact in the lives of others without even knowing it. Whether she was sending silly texts, making a target run with her best friend, painting pumpkins with those she loved, jumping on a trampoline or attending concerts. She had a way of making those she loved feel special.

She was the kind of girl whose smile
would lite up a room without even realizing it, and would have you on the floor laughing until you couldn’t breathe. Her laughter was infectious and funnier than whatever it was you were laughing about in the first place. Kiara was also the girl who would stand up to anyone when it came time to defending those she loved.

Family and friends are invited to attend a gathering for Kiara’s “Remembrance of Life” which will be held Wednesday, September 8th from 4-8 pm at the P.A.C.C. at 175 School Street, Taunton MA

In lieu of flowers donations can be sent to the Taunton Animal Shelter 821 West Water St, Taunton, MA 02780